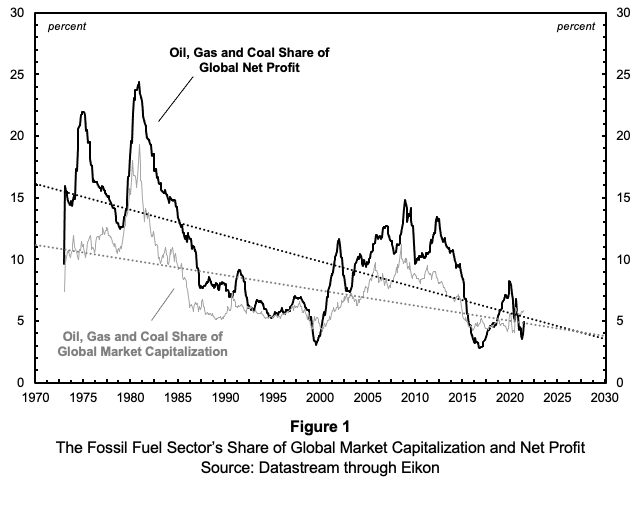 A Requiem for Carbon Capitalism?

News of the immanent demise of companies responsible for a significant portion of global greenhouse gas emissions might sound like a boon for efforts to avert climate breakdown. But just how bad is the outlook for fossil fuels? In this research note, I offer a preview of findings from a new research project on the financial performance of the fossil fuels sector on a global scale.

My research shows that the share of oil, gas and coal companies in global profit and capitalization has steadily decreased over the past half century, while that of alternative energy companies has jumped since 2018. But despite falling distributive shares, what we also find is that the overall magnitude of oil, gas and coal profit and capitalization currently dwarfs that of the alternative energy companies. All signs indicate that capitalists are still, as Tim Di Muzio observed a decade ago, capitalizing a future unsustainable.

To assess financial performance, I draw on Jonathan Nitzan and Shimshon Bichler’s recent analysis of pharmaceutical companies. Nitzan and Bichler identify the forward looking ritual of market capitalization as the ultimate yardstick for corporate performance: the calculation of expected future earnings, adjusted for expected risk and discounted into present value using the normal rate of return (usually the benchmark yield on government bonds). As a measure of performance and a symbolic valuation of power, capitalization is measured in differential or relative terms. The basic components of differential capitalization are expressed in the following formula (the R subscript denotes relative magnitudes):

The relationship between fossil fuel capitalization and profit is the opposite of what Nitzan and Bichler find for global pharmaceuticals. How do we make sense of it? As Nitzan and Bichler explain, if capitalization is consistently lower than profit, this means that capitalists are willing to pay less for a current dollar of fossil fuel net profit than for a current dollar of net profit from other firms. This in turn means that capitalists expect: 1. the future earnings of fossil fuels companies to grow slower than global earnings, 2. fossil fuel risk to increase relative to global risk, 3. some combination of the two.

Returning to Figure 1, we see that the five-decade long decline in the fossil fuel sector’s share of global profit has taken place alongside capitalists consistently anticipating a gloomier future for them. Though barely perceptible on the chart, one thing that is notable is the change that has occurred since the onset of the pandemic. 2020-2021 marks one of the few occasions when the relationship flips, as the capitalization of fossil fuels has moved higher than their profits. To be sure, this does not represent a dramatic upswing in expectations about the fossil fuels sector, but it does mean that, in the here and now, capitalists are not anticipating any further sharp decline in their fortunes. Put another way, if capitalists were anticipating the immanent collapse of fossil fuels companies, we would expect their capitalization to be significantly lower than their net profit. Could this mean that the bottom of the decline has already been reached? If so, efforts to bring an end to fossil fuels production could be hampered.

The figure also suggests that the pandemic has been a major turning point for the alternative energy sector. Recall that the capitalization of fossil fuels companies has edged slightly higher than their net profit since early 2020. For alternative energy, capitalization has shot up since the pandemic and is currently double the level of its net profits. At the moment capitalists are incredibly sanguine about the prospects for this sector.

But before we get too carried away, a sobering dose of reality. The financial performance of alternative energy companies has steadily improved, and capitalist expectations about their future performance are buoyant, but they are still minnows compared to the whales of the fossil fuel sector. The share of fossil fuels companies in global market capitalization currently stands at 5.8 percent; for alternative energy companies it is a mere 0.27 percent.

In 2012 Tim Di Muzio published an article assessing the prospects for a low carbon energy transition. He argued at the time that the entrenched power of the oil and gas sector made such a low carbon energy transition unlikely, and he cited data on relative capitalization of the oil and gas and renewables sectors to make his point. Over the past decade, the gap between the fossil fuels and alternative energy sectors has narrowed, but it is still enormous. Echoing Di Muzio, the research shown here indicates that instead of embracing alternative forms of energy, capitalists “are continuing to capitalize an unsustainable future premised upon non-renewable fossil fuels.” Of course the situation today is even more urgent than it was in 2012, as evidence indicates that we have less than a decade to completely overhaul energy systems to stand any chance of staying within the two degree celsius warming scenario and averting climate breakdown.

This is a work in progress. In lieu of any firm conclusions, I’ll end the discussion by raising two issues that might anticipate some criticisms of this preliminary research.

Despite efforts by fossil fuels companies to make it appear that they are becoming alternative energy pioneers, the evidence suggests otherwise. As Dario Kenner and Richard Heede note, in 2020 none of the major oil companies were aligned to a 1.5 degree celsius pathway. They also cite data on the low-carbon investments of oil companies from 2010 to mid-2018. Over that period, the European oil majors BP and Shell respectively allocated only 2.3 percent and 1.3 percent of their capital expenditures to low-carbon investments; for Chevron and ExxonMobil it was 0.23 percent and 0.22 percent respectively. And in the perverse world of carbon capitalism, Kenner and Heede also discuss how a portion of these investments in renewable energy are being made at extraction sites. That’s right: solar panels and windmills are being constructed to power oil wells.

The fact that the fossil fuel sector’s embrace of alternative energy is more rhetoric than reality should not be surprising. As Brett Christophers forcefully argues, profitability is the lifeblood of the capitalist system, and right now the expected returns on fossil fuels are much higher than they are for renewables, even factoring in low oil prices.

The second issue concerns the focus on companies listed on the stock market. My dataset does not include unlisted state and private companies and so there is a risk that the analysis here misrepresents the decline of the fossil fuels sector. Although the data do not capture the sector in its entirety, it is worth pointing out that many of the largest state-owned energy giants are indeed listed and therefore represented in the analysis. This includes Rosneft, PetroChina, Indian Oil, Gazprom, and since 2019 the biggest oil company in the world, Saudi Aramco.

All this is to say that I think the data presented here offer an accurate account of the financial performance of fossil fuels companies. The decline of the oil, gas and coal sector is real and significant, but from the perspective of planetary survival, it is not occurring rapidly enough.