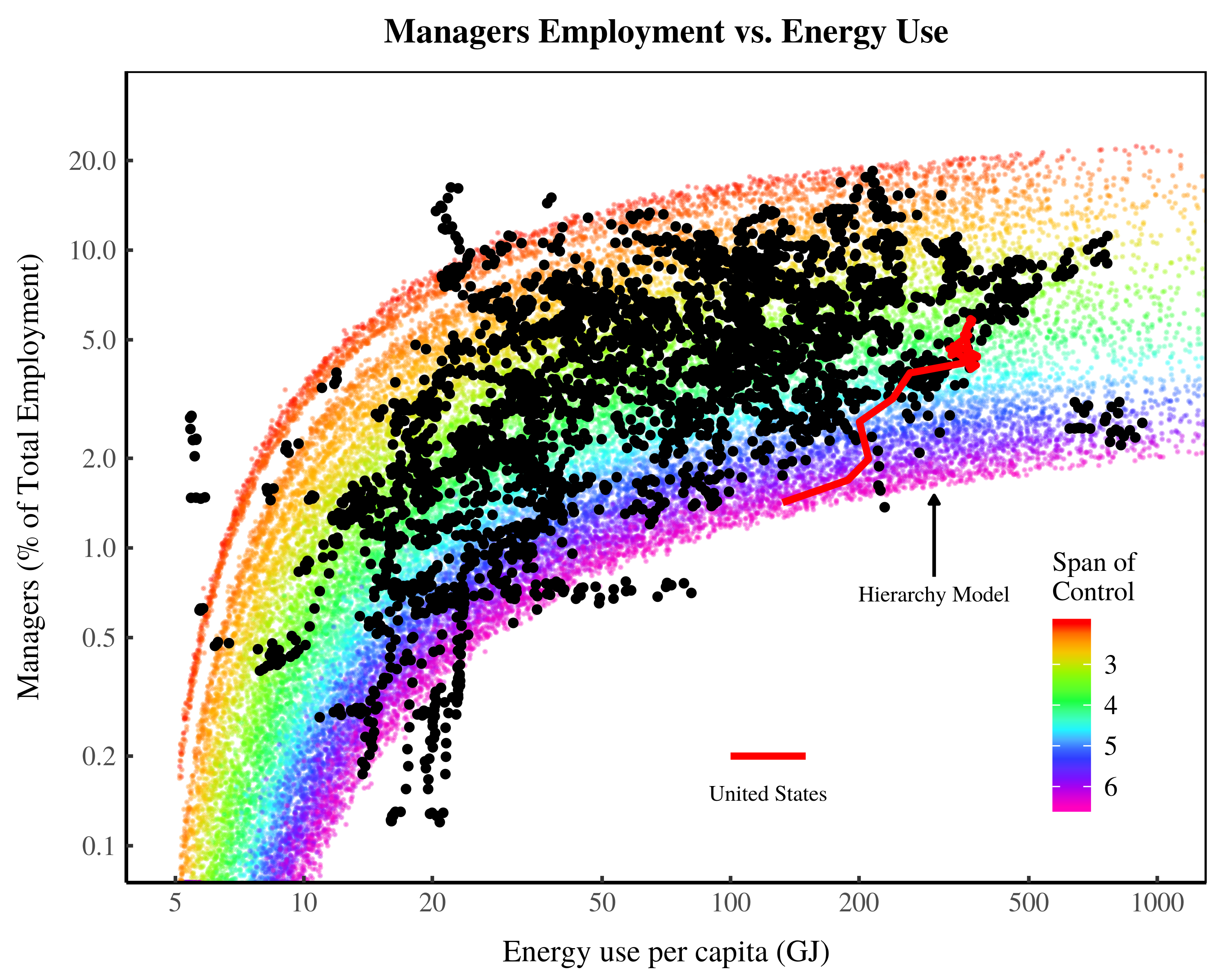 The Growth of Hierarchy and the Death of the Free Market

Do you believe in free markets? Do you think that unfettered competition is the best way to organize society? If so, this post is intended to shake your faith. No, I’m not going to argue that free markets are bad. Instead, I’m going to show you some evidence that may disturb you.

I’m going to show you that as societies develop, they kill off the free market and replace it with a command economy. Let me be clear about what I mean. To most people, a ‘command economy’ means government command. But I use the phrase to mean business command.

A business is an island of central planning — a command economy living in the free-market sea. Yes, businesses sell things on the market. But inside the business, hierarchy is the organizing principle. Employees in a large firm do not barter and trade with each other. Instead, they obey a chain of command. They take orders from superiors and give orders to subordinates.

In a pure free market, this hierarchical organization wouldn’t exist. There would be no islands of central planning amidst the free-market sea. There would be only the sea. Every individual would barter and trade with other individuals. No one would take commands from anyone but themselves.

To quantify the growth of hierarchy, I’m going to look at the growth of managers. Why? Because a manager’s job is to command others — an activity that is synonymous with hierarchy and central planning. I’ll show you that the number of managers in a society grows with industrial development. And we can predict this management growth using a simple model of hierarchy.

If you’re a free market ideologue, you need to wrestle with this growth of hierarchy. No society on earth has industrialized using small-scale competition. Instead, concentrated power seems to be the name of the game.

Hierarchy vs. the Market

Scenario 2. You arrive at work knowing that you have an assigned task to do. You take orders from a superior and give orders to your subordinates. You follow superiors simply because they outrank you (not because they bid to pay you more). Your pay has been negotiated before hand, and has no bearing on your daily workflow.

Having reflected on the difference between hierarchy and the market, I want you to imagine that the firm in Scenario 2 is Walmart. Its 2 million employees obey a strict chain of command that keeps the corporate machine running smoothly.

Now imagine that Walmart is purchased by a free market ideologue. Utterly convinced that the market knows best, the ideologue dismantles Walmart’s hierarchy and replaces it with a free market. In the new Walmart, each of the 2 million employees become private contractors. These contractors bid for every task and obey only the highest bidder. There is no CEO, no chain of command, no formal positions of any kind. Every task and every responsibility is up for auction.

How long will the new Walmart last? You probably agree, not very long. Without the chain of command, Walmart would probably collapse. My point here is to illustrate a principle that I think we all know intuitively. Large groups of people do not spontaneously organize themselves through the market. Humans simply do not behave this way. Instead, large groups are inevitably organized using hierarchy. And as a general rule, hierarchy increases as groups get larger. I think there are biological reasons for this behavior, but I’ll discuss these reasons in future posts. Here I’ll just show you that hierarchy increases with group size.

We’ll begin with fascinating work by Peter Turchin and Sergey Gavrilets. In the figure below, Turchin and Gavrilets show data from historical agrarian empires. As the population of these empires increases, the number of hierarchical levels (within the administration) grows as well:

Figure 1: The growth of hierarchy with group size in historical empires. (Source)

We find a similar trend within hunter-gatherer societies — hierarchy increases with group size. The chart below shows data from Marcus Hamilton and colleagues. Again, we see that the number of hierarchical levels grows with group size. Note that the axes in Figure 2 are reversed compared to Figure 1. Also, Hamilton and colleagues use the term ‘Horton order’ to refer to the number of hierarchical levels in the society.

Figure 2: The growth of hierarchy with group size in hunter-gatherer societies. ‘Horton order’ indicates the number of hierarchical levels within the society. The boxplots show the range of group size for the given number of hierarchical levels. The ‘box’ indicates the middle 50% of data. The horizontal line is the median. The ‘whiskers’ shows the range for 95% of the data. Circles indicate data outside this 95% range.

So as groups get larger, hierarchy increases. Looking at Figures 1 and 2 more closely, we see that group size increases exponentially (by powers of 10) as hierarchy increases linearly. It turns out that we can explain this trend with a simple model of hierarchy. And we can use this model to predict the death of the free market with economic development.

A Model of Hierarchy

Hierarchies are defined by the chain of command, which dictates who commands whom. While the chain of command can be complex, I’m going to create a very simple model of hierarchy. I’ll assume that every superior controls the same number of subordinates. We call this subordinate-to-superior ratio the span of control.

Let’s imagine a hierarchy with a span of control of 2. Each superior controls two subordinates. The hierarchy looks like this:

Figure 3: A hierarchy in which each superior controls 2 subordinates.

Our simple model of hierarchy explains why group size grows exponentially with the number of hierarchical levels — the behavior we saw in Figures 1 and 2. This behavior is caused by the nested chain of command. Groups add a new level of hierarchy whenever group size increases by a factor of the span of control.

The Growth of Managers

To make the case that economic development involves killing the free market, we’re going to look at the growth of managers. To me, nothing says ‘command economy’ more than the word ‘manager’. The job of managers is to give orders — to command the activities of others. So as the management class grows, the free market dies and is replaced by hierarchical central planning.

I’m going to show you that economic development — measured by energy consumption — involves the systematic growth of managers. If you’re impatient, you can skip straight to the evidence (Figure 6). But I think the evidence is more meaningful if we first use our model of hierarchy to predict the growth of the managers.

So let’s recap what we know. We have a simple model of hierarchy that predicts the number of managers in a single firm. And we have a model of how the size distribution of hiearchy changes with energy use. Combining these models gives us everything we need to predict how the management class should grow with industrial development.

Armed with our model of how hierarchy grows with energy use, let’s look at real-world trends. Remember that we’re quantifying the growth of hierarchy by looking at the relative number of managers in a society. More managers means more hierarchy.

Figure 6 shows how the management class grows with energy use in real-world societies. Each black dot is a different country. The rainbow is the trend predicted by our hierarchy model. The different colors of the rainbow represent different spans of control (the number of subordinates controlled by each superior in a hierarchy). Let’s summarize the results. Not only does manager employment grow with energy use, this growth is almost exactly what is predicted by our model of hierarchy.

Figure 6: The growth of management with energy use. As energy use increases, the management share of employment grows as well. Black dots represent individual countries. The red line shows historical trends in the United States. The rainbow shows the hierarchy model’s prediction. Color indicates the span of control in the model. Management data is from ILOSTAT. Energy use data is from the World Bank. For US data sources, see Energy and Institution Size.

Figure 7 simplifies things by looking at the trend in the growth of managers. I compare the empirical trend to the best-fit model. The model’s prediction is pretty accurate. The only significant deviations from the model happen at very low and very high energies. And it’s here that our sample size is small.

Figure 7: The trend in the growth of management with energy use. The blue line shows the smoothed trend among the countries of the world. The red line shows the trend predicted by the best-fit model.

So there you have it. As societies industrialize, they kill off the free market and replace it with hierarchy. The management class grows, and with it, the command economy. And we can predict all of this with a simple model of hierarchy.

Power in the Name of Freedom

You’ll here billionaires like the Koch brothers praise the ‘free market’. Their language evokes pleasant images of entrepreneurs and small businesses. But in reality, the Koch brothers (and other free-market advocates) usually seek policies that benefit big business (i.e. large hierarchies). So the term ‘free market’ is doublespeak for the unfettered power of large hierarchies. I think it was Jonathan Nitzan who, in conversation with me, aptly called this “power in the name of freedom”.

What we see here is evidence that bears this out. As societies industrialize, we talk a lot about the free market. But the reality is that in the name of freedom, we’re actually concentrating hierarchical power.