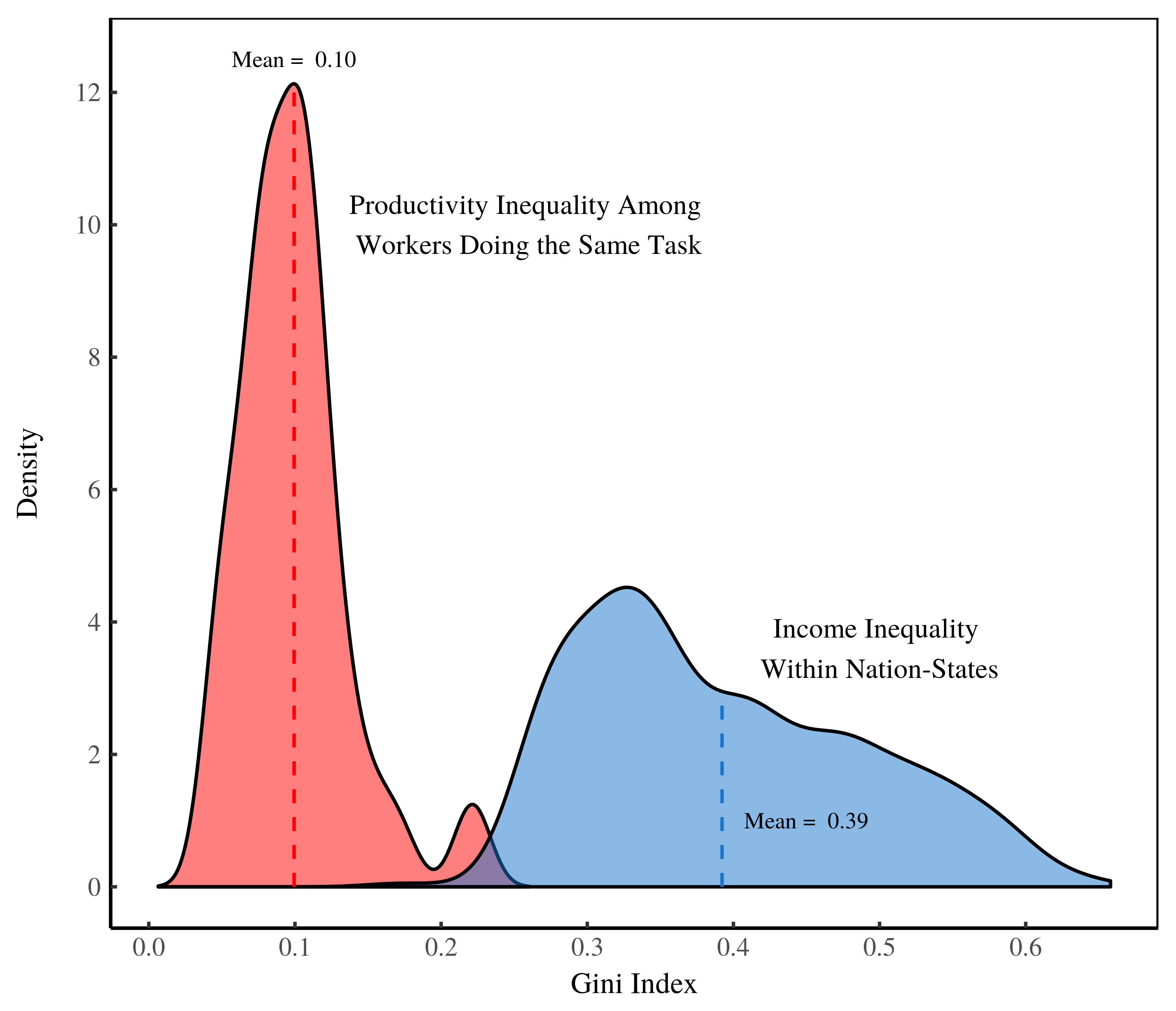 No, Productivity Does Not Explain Income

Did you hear the joke about the economists who tested their theory by defining it to be true? Oh, I forgot. It’s not a joke. It’s standard practice among mainstream economists. They propose that productivity explains income. And then they ‘test’ this idea by defining productivity in terms of income.

In this post, I’m going to show you this circular logic. Then I’ll show you what productivity differences look like when productivity is measure objectively. They’re far too small to explain income differences.

The marginal productivity theory of income distribution was born a little over a century ago. Its principle creator, John Bates Clark, was explicit that his theory was about ideology and not science. Clark wanted show that in capitalist societies, everyone got what they produced, and hence all was fair:

It is the purpose of this work to show that the distribution of the income of society is controlled by a natural law, and that this law, if it worked without friction, would give to every agent of production the amount of wealth which that agent creates. (John Bates Clark in The Distribution of Wealth)

Clark was also explicit about why his theory was needed. The stability of the capitalist order was at stake! Here’s Clark again:

The welfare of the laboring classes depends on whether they get much or little; but their attitude toward other classes—and, therefore, the stability of the social state—depends chiefly on the question, whether the amount that they get, be it large or small, is what they produce. If they create a small amount of wealth and get the whole of it, they may not seek to revolutionize society; but if it were to appear that they produce an ample amount and get only a part of it, many of them would become revolutionists, and all would have the right to do so. (John Bates Clark in The Distribution of Wealth)

So the neoclassical theory of income distribution was born as an ideological response to Marxism. According to Marx, capitalists extract a surplus from workers, and so workers get less than what they deserve. Clark’s marginal productivity theory aimed to show that this was not true. Both capitalists and workers, Clark claimed, got what they deserved.

The message of Clark’s theory is simple: workers need to stay in their place. They already earn what they produce, so they have no right to demand more.

Clark created marginal productivity theory to explain class-based income — the income split between laborers and capitalists. But his theory was soon used to explain income differences between workers.

In the mid 20th century, neoclassical economists invented a new form of capital. Workers, the economists claimed, owned ‘human capital’ — a stock of skills and knowledge. This human capital made skilled workers more productive, and hence, made them earn more money. So not only did productivity explain class-based income, it now explained personal income.

With the birth of human capital theory in the 1960s, the marginal revolution was complete. All income differences, economists claimed, could be tied to productivity differences. And from then onward, there was an endless stream of empirical work that ‘confirmed’ that productivity explained income.

A sticky problem: how do we compare different outputs?

Before we look at how economists ‘confirm’ marginal productivity theory, we have to backtrack a bit. We have to understand a basic problem with the concept of productivity.

I think it’s obvious that we cannot do so objectively. Any comparison will require a subjective decision about how to convert corn and music into the same dimension. The lesson is simple. We cannot objectively compare the productivity of two workers unless they produce the same thing.

Even worse, it’s possible to earn income without producing anything. Think about the practice of patent trolling. Patent trolls are people who buy the patent for a product that they neither invented nor produce. These individuals don’t ‘produce’ anything. But they still make money. How? Because they get the government to enforce their property rights. Patent trolls sue (or just threaten to sue) anyone who infringes on their patent. Viola, they earn income without producing anything.

Given the problems with comparing the productivity of workers with different outputs, you’d think that marginal productivity theory would have died long ago. After all, a theory that can’t be tested is scientifically useless.

To understand the trick, we have to look at some basic accounting definitions. Figure 1 shows how a firm’s income stream gets split. The firm earns income in the form of sales (right). Part of this income is paid to the firm’s owners as ‘profits’, and part of it is paid to workers as ‘wages’. The rest goes to other firms as ‘non-labor costs’.

Figure 1: Dividing an income stream. Accounting principles dictate that a firm’s sales get divided into profits and wages.

With our accounting definition in hand, we’re ready for the trick used by neoclassical economists. To test their theory, they define ‘productivity’ in terms of income! They assume that a firm’s sales indicate its ‘output’.

Figure 3: The neoclassical slight of hand. Neoclassical economists assume that sales measure ‘output’. Presto! They show that wages are proportional to productivity. Or rather, they show what we already knew was true from Figure 2: the income on the right explains the income on the left.

The key here is to forget that we are dealing with an accounting truism. Sales are no longer ‘income’. Sales are now ‘output’. And this output miraculously ‘explains’ wages!

I wish I could tell you that this is a joke, since it doesn’t pass the laugh test. But it’s not. Measuring ‘productivity’ using sales (or value added) is standard practice in mainstream economics.

And so economists test their theory of income distribution by assuming it is true. They measure productivity in terms of income. Then they find (unsurprisingly) that productivity ‘explains’ income.

How to show that productivity ‘explains’ income:

I’ve taken the liberty of creating a step by step guide for how to test marginal productivity theory and guarantee that the theory succeeds:

Here’s an interesting question: how much does productivity vary among workers doing the same task? The psychologist John E. Hunter spent much of his career answering this question. According to his results, the answer is ‘not very much’.

Figure 3: How productivity differences between workers doing the same task compare to income inequality within countries. Source: The Trouble With Human Capital Theory

Next to this productivity data, I’ve plotted the distribution of inequality within all the countries of the world (the blue curve). The average Gini index within these countries is about 0.4.

The idea that income is caused by productivity is a dead end. Marginal productivity theory only survives because economists never test it objectively. Instead, they resort to slight of hand. They measure productivity using income, and claim that this ‘confirms’ their theory.

Let’s not mince words. Marginal productivity is a thought virus that is sabotaging the scientific study of income. It needs to die.

[1] Economists will often subtract non-labor costs from sales to calculate ‘value-added’. They’ll then claim that value-added measures firm output. It’s the same slight of hand, since they’re still converting an income stream into an ‘output’.