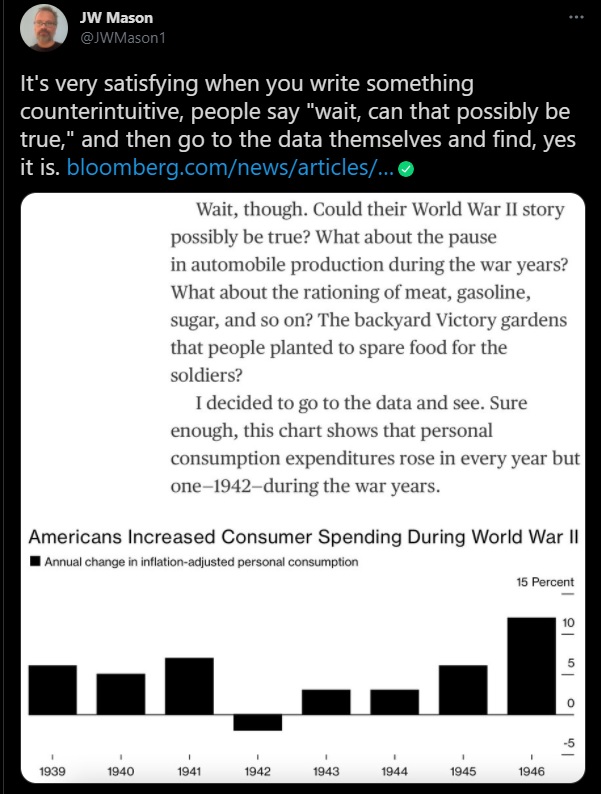 Bloomberg writer Peter Coy was motived to perform this research by an NYT op-ed from Mason and Mike Konczal. Mason and Konczal’s primary argument is that we can have a post-pandemic economic boom, but that it needs to be properly managed. They are trying to pre-empt the hand-wringing about ‘over-heating’ the economy and creating runaway inflation. Mason and Konczal point to the experience of WWII, when U.S. household consumption increased even as large amounts of labour and material resources were diverted to the war effort.

Coy was able to affirm the evidentiary basis of Mason and Konczal analogy between the present era and WWII-era production.

The pair argue that the demand driven by military need led to increased supply capacity. Importantly, that increased capacity benefited the broader populace, hence the increased household consumption. Although Coy is receptive, he tempers their argument, citing an article by economist Price Fishman, who argued that the national accounting data “does not account for the declines in quality of goods, the extra costs of obtaining rationed goods, and the complete absence of other goods.”

Fishman is opening a huge can of worms. The construction of “price-adjusted” or “inflation-adjusted” measures of output—called “real” measures in many national accounts—is extremely fraught, not least because of changes in quality, and changes in the qualitative mix of goods and services. Fishman suggests that “better estimates of the true prices” of consumer goods and services show that individuals consumed less during the war years.

This notion of “true prices” is downright ridiculous. It exposes economists’ lack of ontological thinking, their worship of the price mechanism as something that could express the true value of a good or service, and their confidence that economists trained in equilibrium thinking know how nominal prices should be adjusted to express real value.

There are better and worse prices, but there are no true prices. Better and worse is an inherently normative assessment, while economists consider themselves predominantly positive analysts of the economy as it is.

Fishman is privileging other estimates that are still just estimates, while infusing them with a veneer of objectivity. Economists constructing the estimates preferred by Fishman must make numerous assumptions to justify whatever adjustments are being made to actual, recorded prices. This is true of the reported “real” figures and the ones that support Fishman’s argument.

Nominal prices, the one that consumers actually paid, the ones that informed input and output choices, the ones that are supposedly clearing markets by balancing supply and demand, are deemed unsuitable by those whom Fishman claims are creating “better estimates of the true prices”. For all their valorization of “the market”, economists frequently grant themselves the soothsaying ability to understand what a price ought to be.

Attacking the notion of “true prices” or “real measures” of output is not the purpose of these post. For more on that, check out the research of economist Blair Fix [pdf], including his work with economists Jonathan Nitzan and Shimshon Bichler.

Rather, I want to examine the WWII analogy to develop more insights on proper management of a post-pandemic economic boom. Greater management is necessary if we do not want a post-pandemic boom to pour fuel onto the fire of the climate crisis, as well as numerous other ecological crises.

Mason and Konczal’s op-ed offers not one word on our our multiple ecological crises. On the one hand, Mason and Konczal can be forgiven, since they are fending off a more immediate threat, in the form of rising austerity rhetoric, and they are writing in the limited space of an op-ed. On the other hand, economists writing about macroeconomic matters need to adopt the habit of always situating the economy within the environment.

Current levels of production are already unsustainable in terms of resource use. Increases in productive output have always had commensurate increases in material inputs and waste production. A boom risks worsening the situation.

Somehow the same people who lectured us that “there’s no such thing as a free lunch” also told us that we could have indefinite economic growth. The latter message has been useful for obfuscating how environmentally destructive “growth” has been. However, it is the former message that has economists of the Larry Summers ilk adopting the latest version of their condescending “I know you don’t want to hear this but” tone and lecturing us that governments must rein in spending… or else.

Their story is that government spending crowds out investment by the private sector. It is private sector investment, we are told, that makes endless growth possible. While they will give a nod to Keynes, and admit a role for government to smooth out the vicissitudes of the market, they remain market evangelists, preaching the good word of competition, profit maximization, and the price mechanism.

Mason and Konczal reject this story. Although they do not discuss our ecological crises, dealing with these crises will be much more difficult if the austerians win the argument.

Coy notes that private sector investment did fall during the war. However, to claim “crowding out” as the reason requires heroic assumptions disconnected from reality. The concept of crowding out assumes that if the public sector had not spent this money, then the money would have been available to the private sector, which would have used those funds in other productive ways. Not only is this fiscally and financially illiterate, it demonstrates a lack of understanding of industrial investment.

It was wartime. There was incredible uncertainty. Memories of depressed household demand and persistent stagnation were palpable. Of course business pulled back its own investment. Not only did the government not crowd out the private sector, investment by the latter would likely have fallen more if the government had not spent as it did.

The analogy with WWII is important for both our economic recovery from the pandemic and the economic transformation needed to deal with on-going ecological crisis. At the same time, the analogy has limits, although these too are illuminating. Not least, we cannot treat quantitative increases in household consumption as unambiguously good. In parts 2 and 3, I will develop the analogy with WWII further, and see what else it can tell us, and where it falls short.

Part 2 will look at the qualitative shifts in U.S. household consumption that took place during the war. Part 3 will move from the U.S. as the analogic country to the U.K. While the bulk of both Parts 1 and 2 is heavily empirical—perhaps mind-numbing so—the conclusion is much more speculative.

I argue that our ecological crises requires planning if our economies are to function within the Earth’s material constraints. However, this does not mean we must deprive ourselves and live lives of meagre subsistence. Far from it.