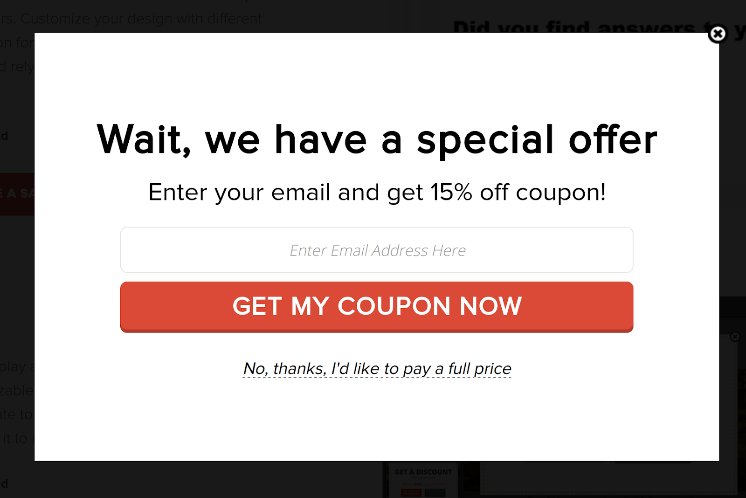 The web is unusably beshitted with terrible ad-tech

The web is unusably beshitted and encrufted with popups, interstitials, rolldowns, nagware, paywalls, autoplaying video, ads that scroll with the page, and worse. I haven’t looked at the web without an adblocker in years and it’s still barely usable.

The modern web’s equilibrium is “as terrible as possible, without being so terrible that you stop reading,” or, worse, “as terrible as is necessary to get you pay to bypass the paywall.”

In the CJR, David Roth publishes one of the most pitiless, accurate, evocative descriptions of using the modern internet of cruft.

The page loads, and a little video ad box rises from the bottom left of the screen and begins buffering. Then a big box pops up over the small one with an offer to subscribe to the paper at a special promotional rate… As you contemplate it, the video begins to play in a muted spasm. This throws a scrim of gray over the rest of the page, making it impossible to read…While you’ve been triaging a second small video player has floated up into the middle left of the screen. You manage to close these various boxes, and now you can scroll. For a few seconds, anyway, until another ad creeps down from the banner ad above the headline.

But Roth isn’t merely complaining here. He’s also digging into the underlying reality: dwindling margins, short-term thinking, monopolization of the ad-market, and a buyer’s market for ads that lets advertisers demand worse and worse of publishers. Publishers are staffed with people who are “perpetually maxed-out and stressed and scrabbling for a dwindling and finite amount of money.” They’re choosing chumboxes and other garbage because they want to keep the lights on.

This happened before, of course. It’s an HTML5, CSS-enabled reprise of the pop-up wars, where exploding inventory and finite advertising allowed advertisers to play publishers off against each other with increasingly obnoxious, intrusive pop-ups.

These were unbelievably terrible, even by modern standards. Pop-ups would spawn at 1px X 1px, making them invisible, autoplaying audio. Others would sense your mouse heading for the close box and move themselves away from your pointer. They’d spawn 3 more pop-ups for every one you closed, or 300, until your computer ran out of RAM and crashed, taking all your work with it.

When Opera, and then Mozilla, turned pop-up blocking on by default, users finally had a meaningful reason to prefer one browser to the others. One browser was usable. The other one let pop-up ads crash your computer and eat your unsaved docs. As users switched en masse to blocking browsers, publishers could tell advertisers, “Look, we’ll run any garbage ad you tell us to because we need your money. But if it’s a pop-up it will be blocked by the majority of our users. They just won’t see it.”

The pop-up wars were won because technologists helped users exercise technological self-determination. But increasingly, browser vendors are ad-tech companies. Even when they’re not, browsers are being designed to serve publishers (who are under advertisers’ thumbs), not users.

We should address monopolies in ad-tech and browsers, we should create meaningful privacy protections via a federal privacy law with a private right of action. But all of that needs to be accompanied with legal cover for users who assert the right to unshittify their web sessions.

This won’t just protect users, it will protect publishers. It’s one thing to prohibit publishers from intrusive advertising. But it’s another altogether to make that kind of advertising literally technically impossible.