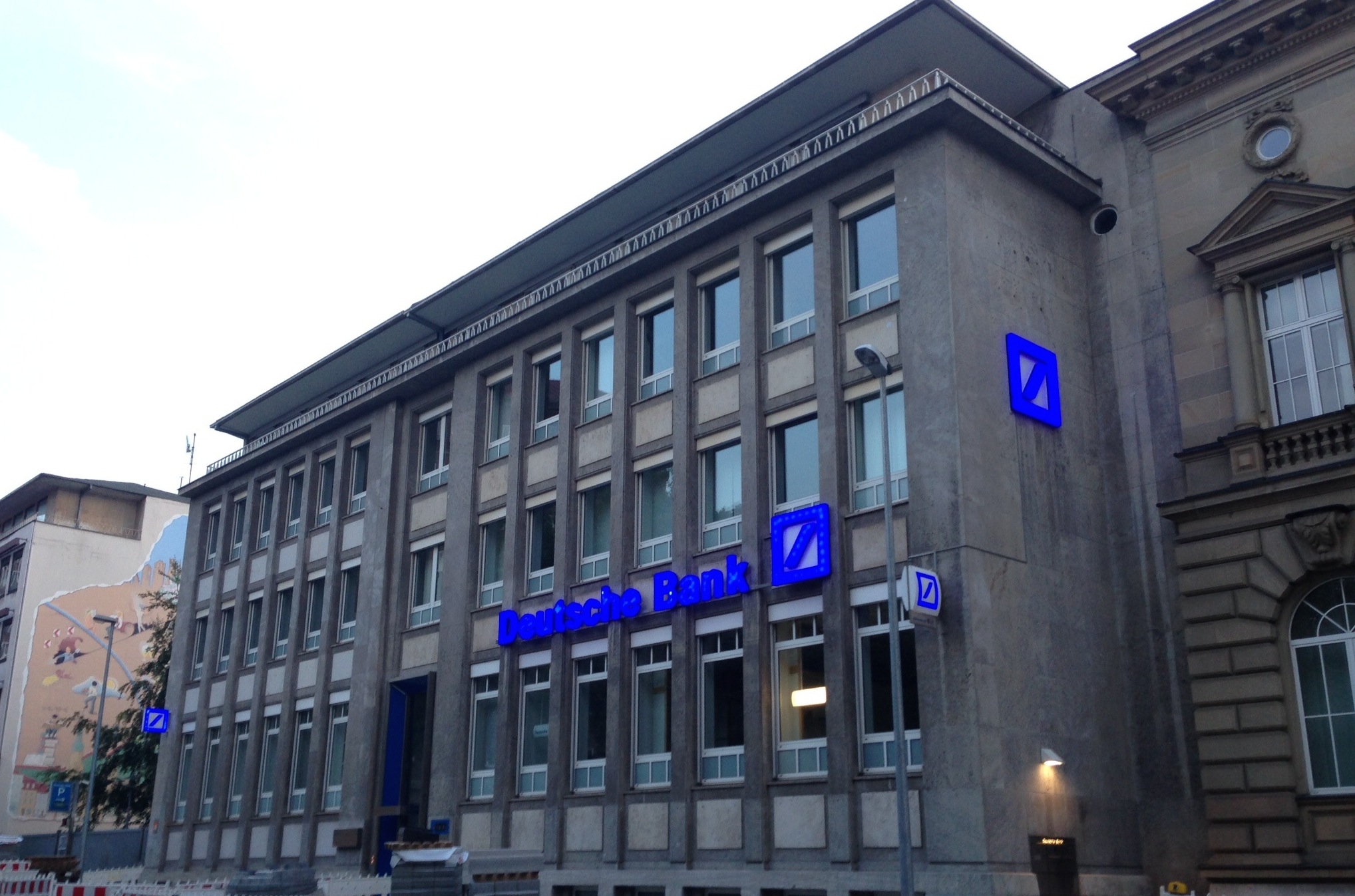 Deutsche Bank was a central figure of the 2008 global financial crisis. While some of its compatriots, such as Goldman Sachs, have re-ascended to the commanding heights of global capital, Deutsche remains a shadow of its former self as seen in the graph below (screenshot from Yahoo! Finance). A comparison of Deutsche Bank (DB) with Goldman Sachs (GS) and the S&P 500 (^GSPC) expresses significant differential decline for the German bank. The graph shows the last ten years, so the starting point of January 1, 2007 is shortly before the crisis was felt on capital markets.

At its lowest, in February, 2009, DB was 82 percent below its starting value. In comparison, the S&P 500 was 49 percent below its January, 2007 starting value. As of the capture of this image, the S&P 500 is more than 50 percent above its starting point, while GS has just recently surpassed its pre-crisis value. Although, in differential terms, it remains below dominant capital as benchmarked by the S&P 500, it is well ahead of DB, which is lower in value than at the depths of the crisis and vastly so differentially.

Spiegel Online offers an analysis of what happened at the bank. Their take is both sprawling and penetrating. The analysis moves between scales, attributing the bank’s misfortunes to both individual bank executives – “something must have gone wrong and someone must have been responsible” – and aspects of national identity – “The German-ness of Deutsche Bank also had a significant role to play over the years.”

The authors include aesthetic attributes in the rise of investment banking and Deutsche Bank’s place within it. They note that the Ivy League graduates enrolled by the Big Banks tended to be attractive alpha males “who personified avarice.” At Deutsche, a new CEO contrasted these qualities with those of the “chaste souls” in German banking who “valued good manners, timeliness and order.” This shift in personal qualities was one of the facets of the prism from which the banking crisis emerged. It is difficult to imagine such seemingly trivial phenomenon being granted relevance in the productivist-materialist frameworks that dominate critical political economy

Of course, personal qualities cannot be examined in isolation. The authors note that Deutsche Bank lacked access to the types of employees being hired and developed at the British and American banks: “The bank needed mathematicians, programmers, code experts with business instincts – and it needed salespeople who could sell the bank as a product.” The old way of doing things, the old pipelines from schools into the bank, the old personality traits no longer worked, if Deutsche Bank was going to join – or exceed – the rising tide of investment banking. A new creorder was emerging and Deutsche could either participate in its creation or be left outside, growing less powerful. It chose to join the process.

However, if Deutsche was merely aligning itself with a trajectory now widely shared, why has it fared so much more poorly in the aftermath? The authors attribute this differential to the organizational and cultural shift that Deutsche had to make relative to its investment banking competitors. According to the authors, the particularly rapacious behaviour of investment banking in the years leading to the crisis came much more naturally to the British and American banks than it did to Deutsche. The English-speaking banks were already formatted for the Brave New World of promiscuous securitization and derivation. Conversely, “Deutsche Bank became like a site undergoing constant construction – that still hasn’t been completed to this day. Every quarter, the bank’s organizational charts looked different.” In other words, attributes that made Deutsche a stable, reliable banking entity before it augmented itself to joined the pre-crisis accumulation frenzy now threaten its existence because of the uneasy fit between the old and the new. One possible lesson is that the investment banks were far from chastened by the crisis. If they had been, Deutsche Bank’s conservative origins would have served it well as its sectoral competitors sought similar solid ground. Instead, it is their relative rapaciousness that has been rewarded by the market.

One manifestation of DB’s incomplete shift to the new format was a greater loyalty to staff than shown by other investment banks. This loyalty was rooted in the culture of the German banking institution, which saw value in developing and maintaining stable relations with its employees. Goldman Sachs had no problem sacking people and cutting salaries off during times of deccumulation. The lack of loyalty ran in both directions. Bankers readily shifted institutions in pursuit of greater remuneration.Deutsche’s loyalty was poorly paired with the large bonuses offered in investment banking to attract top talent. The authors offer the example of a mini-crisis in 2002 that saw Goldman and Merrill Lynch decrease personnel costs by 10 percent. Over the same period, Deutsche’s personnel costs increased by six percent, largely in the form of bonuses.