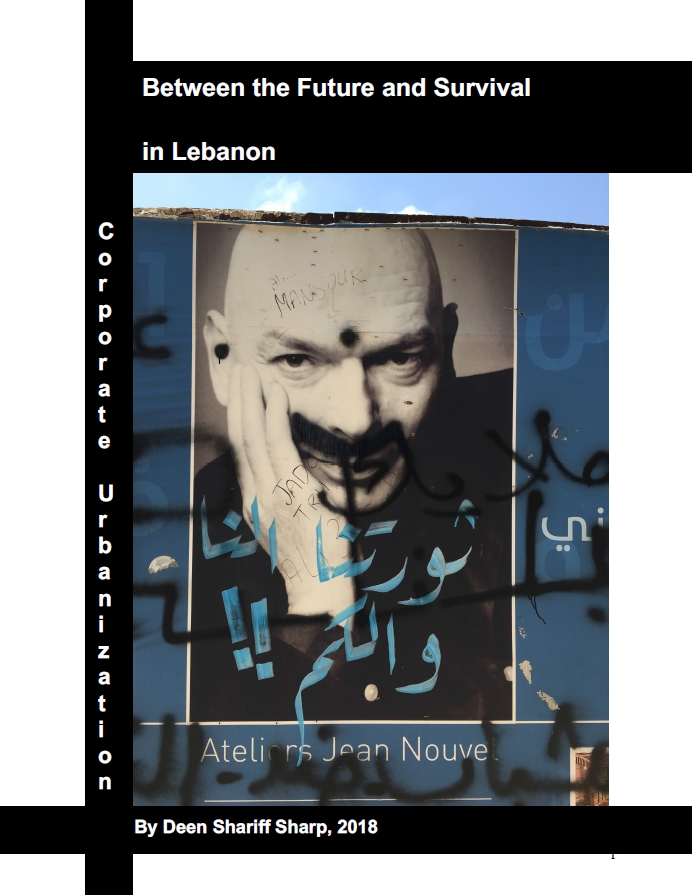 Sharp, ‘Corporate Urbanization: Between the Future and Survival in Lebanon’

If you look today at the skyline of downtowns throughout the Middle East and beyond, the joint-stock corporation has transformed the urban landscape. The corporation makes itself present through the proliferation of its urban mega-projects, including skyscrapers, downtown developments and gated communities; retail malls and artificial islands; airports and ports; and highways. Built into these corporate urban structures are edifices of politics, ideology and certain forms of socio-spatial and temporal organization. The corporation, however, has largely escaped critical scholarly analysis in Geography and/or Urban and Middle East Studies.

In this thesis, I argue that the corporation is far more than a mere business enterprise and is in fact one of the most important apparatuses in the organization of our socio-spatial relations. Through an analysis of the 19th-century French joint-stock corporation, Compagnie Impériale Ottomane de la Route Beyrouth-Damas, and Solidere the corporation that led the reconstruction of Beirut following the Lebanese Civil War (1975-1991), this thesis considers and explores the force of the corporation in assembling socio-spatial relations and certain urban futures. Drawing on work in Science and Technology Studies (STS) and Geography, I consider the process of capitalization, which is central to how the corporation organizes its operations.

Capitalization represents the present value of a future stream of earnings. I argue that capitalization is now central to the urbanization process and that the urban fabric has provided the corporation with a durable structure to guarantee a stream of income. Capitalized urbanization, I contend, is the building of a certain future into the urban present – also understood as the extension of time (the future) through the concentration of space (urbanization). It is therefore not only an economic proposition but one that necessitates broader socio-political and spatial control. In the case of the Compagnie, I argue, through its capitalization this corporation established a new power network that not only generated great profits for its shareholders but also contributed to the rise of Beirut as a central trading hub and facilitated the French domination of the Levant.

The establishment of Solidere would once again create an urban corporate imposition that greatly altered the socio-spatial relations of Beirut and Lebanon more broadly. Solidere, I contend was central to the formation of the Second Lebanese Republic. Through Solidere’s corporate socio-spatial apparatus and its capitalization of the built environment, the company was able to build a certain future into the urban present, foreclosing other possible futures and socio-spatial formations.

Corporate Urbanization: Between the Future and Survival in Lebanon