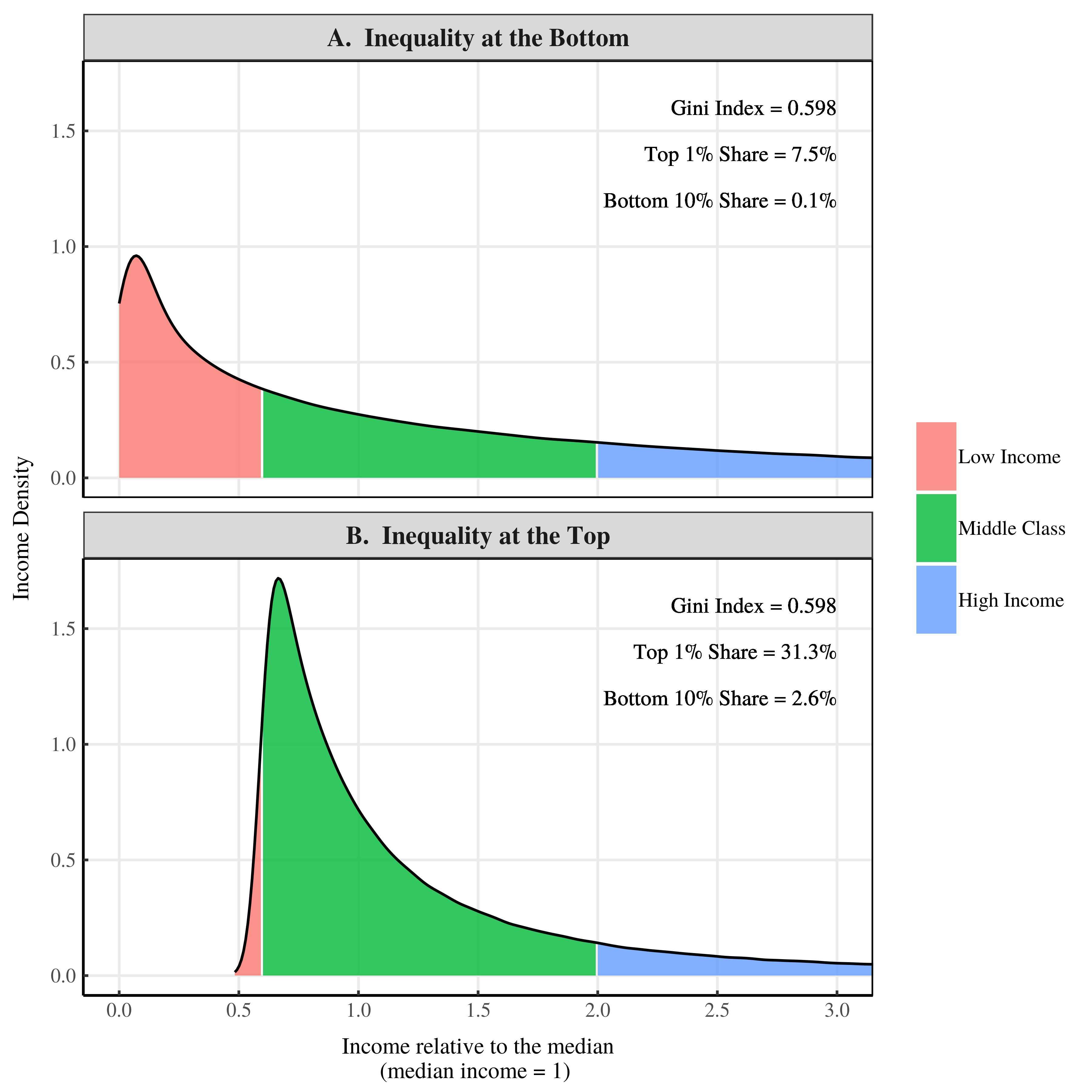 On the surface, there seems to be nothing wrong with this type of pronouncement. But when we look under the hood of inequality measurements, there are some serious problems. Unlike height, inequality has no unambiguous dimension. Inequality is something that we must define before we can measure it. We must decide how we will reduce a complex distribution of income to a single number.

The problem is that a single inequality metric cannot tell us about the shape of the income distribution. And as I hope to show here, this shape is important. It determines where the inequality is located.

To illustrate the problems with measuring inequality, I’m going to look at two hypothetical societies. Both have a Gini index of 0.6, which is roughly the same as the present-day United States (using data from the World Inequality Database). If you’re not familiar, the Gini index is a popular measure of inequality that ranges from 0 (no inequality) to 1 (maximum inequality). So a Gini index of 0.6 is quite large.

Let’s look at the difference between these two societies.

The probability density of income

Figure 1 shows the income density curves for our two societies. I’ve made the median income of both societies equal to 1. So a value of 3 on the x-axis indicates an income that is 3 times the median.

At this point, I hope your head is spinning. How can three different measures of inequality show three (seemingly) contradictory results? To answer this question we need to look at how our two societies differ.

If you go back to Figure 1, you’ll see that I’ve divided our hypothetical societies into three classes: low income, middle class, and high income. Yes, this class scheme is arbitrary. But it’s useful to illustrate the difference between our two societies.

Using these class divisions, let’s look at the differences between our two societies. We’ll start with class size. Figure 2 shows the proportion of people in each class:

Next, we’ll look at the Gini index within the different classes of each society. Here’s the result:

Figure 3: The Gini index within each class of our two societies.

To really understand the difference between our two societies, we need to look at the income distributions using a logarithmic transformation.

Under a log transformation, the numbers 1, 10, 100, and 1000 become 0, 1, 2, and 3 (respectively). This transformation compresses the distribution, allowing us to better see both the left and right tails. Seeing these tails is important, because that’s where the inequality lives.

With this in mind, lets analyze the trends in Figure 4. Our society with inequality at the bottom has a fat left tail and a thin right tail (Fig. 4A). So in this society, inequality is concentrated at the bottom of the distribution. In our society with inequality at the top, the opposite is true. This society has a thin left tail and a fat right tail (Fig. 4B). So almost all of the inequality occurs at the top of the distribution.

To conclude, both of these income distributions have fat tails, which is why they both have a large Gini index. But one has a fat left tail and one has a fat right tail. So despite having the same Gini index, these societies are very different.

Why the Gini Index is blind to the ‘location’ of inequality

The Gini index is defined by something called the ‘Lorenz curve’. The Lorenz curve is a way of visualizing how income size relates to the share of total income.

To make a Lorenz curve, we put everyone’s income in ascending order (from smallest income to largest income). Then we calculate the percentile of each income (it’s rank in percentage terms). Next, we calculate the share of income held by all individuals below each percentile. To make the Lorenz curve, we plot the income percentile on the x-axis and the cumulative share of income on the y-axis. Here’s an example.

To make sense of a given Lorenz curve, we usually compare it to the Lorenz curve for a perfectly equal society. In such a society, the income share held by each percentile is the same as the percentile itself. For instance, the bottom 10% of individuals will earn 10% of all income, the bottom 90% will earn 90% of all income, and so on. In a perfectly equal society, the Lorenz curve is a straight line (the dotted line in Figure 5).

Now that we’ve defined the Gini index, let’s look at the Lorenz curves in our two hypothetical societies:

Figure 7: The Lorenz curves of our two societies.

The way to interpret the Lorenz curve is to look at its vertical distance from the line of perfect inequality. The greater this distance, the greater the inequality at the given income.

My discussion so far has been quite technical. I’ve tried to show you how two very different societies can still have the same Gini index. Now I’l reflect on what these hypothetical societies mean for the real world.

An income cap, but no safety net

Let’s start with our society that has inequality at the bottom. In real-world terms, this is a society with no social safety net. If you live in this society, there is no limit to how poor you can be. To give this context, suppose this society had a median income of $40,000 — about the same as the US. The minimum income in this society would be about a 0.01 cents. So the poor are starving to death.

But while this society allows extreme poverty, it also limits large incomes. In simple terms, we can think of this as an income cap. If the median income was $40,000, the maximum income in this society would be about 1.7 million dollars. In other words, our ‘inequality at the bottom’ society has no billionaires and virtually no millionaires. To summarize, it is a society with an income cap but no safety net

A safety net, but no income cap

In contrast, our society with inequality at the top has a strong social safety net. If the median income was $40,000, the minimum income would be about $20,000. In effect, this society has a guaranteed basic income.

But while this society has is a strong safety net, it is still very unequal because it allows stupendously large incomes. If the median income was $40,000, the maximum income would be about 600 million dollars. This society is rife with millionaires and, and has plenty of billionaires. [3]

Despite having the same Gini index, our two societies are very different. One limits top incomes, but allows the poor to starve. The other has a universal basic income, but doesn’t limit excess at the top.

Which is worse: inequality at the bottom or at the top?

Here’s an interesting question. If two societies have the same Gini index, is it more corrosive to have inequality at the bottom or at the top? To my knowledge this question hasn’t been researched. (If it has, leave a comment and dispel my ignorance).

Although I don’t pretend to have definitive answers, we can get some insight into this question if we reframe it slightly. Is it better to have a safety net or a salary cap? Judging by the use of these policies, inequality at the bottom may be more corrosive.

Many societies have safety nets. They use policies like a minimum wage, welfare, unemployment insurance, and so on. But very few (if any) societies have implemented income caps. (Again, if you know of a society with an income cap, leave a comment).

Professional sports leagues are the only example of a salary cap that I can think of. But note that these leagues cap the income of players. They wouldn’t dream of limiting the income of team owners. If anything, the salary cap on players increases the income of owners.

Does the ubiquity of social safety nets (and the lack of real-world income caps) mean that inequality at the bottom is more corrosive than inequality at the top? Probably. At the very least, it means that implementing a safety net is more politically palatable than capping incomes. Few people are willing to tolerate starvation in the midst of plenty. But if their own income is tolerable, many people will ignore the excesses of the rich.

Inequality: Both ‘how much’ and ‘where’

I hope this post has given you some insight into the problems with measuring inequality using a single number. A single measure does not tell us about the location of the inequality.

To understand this location, we need to use multiple measures of inequality. Fortunately, this is now easy to do. For many countries, the World Inequality Database publishes enough data that we can construct almost any inequality metric we want.

To conclude, we need to move beyond the simple idea that ‘inequality’ can be captured by a single number. In reality, inequality is a complex phenomenon that deserves non-reductive analysis.

[3] We usually define millionaires and billionaires in terms of wealth, not income. But it’s not hard to convert between income and wealth. The very rich mostly earn income from property. So income is the return to wealth. If the return to capital is 10%, someone with $10 million in assets would earn $1 million. With the same rate of return, you’d need $6 billion to earn $600 million.