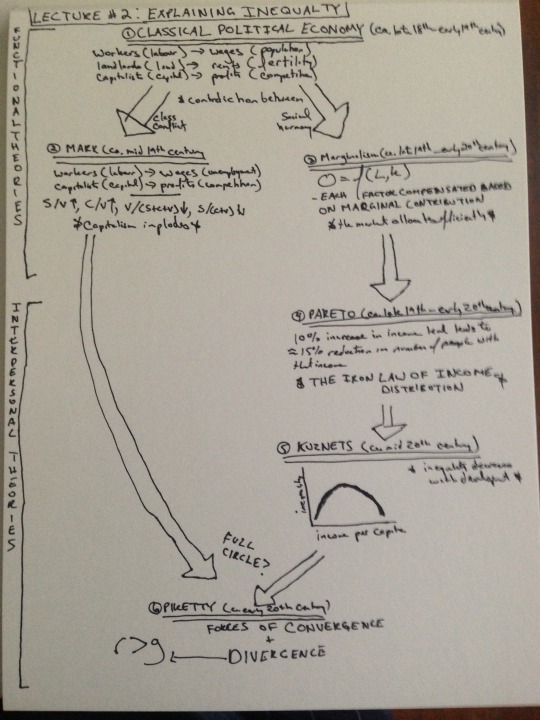 I’m spending some time during these summer months developing a new undergraduate course on wealth and income inequality. Branko Milanovic’s wonderful new book Global Inequality: A New Approach for the Age of Globalization will be the main text for the course. The first half of the course will examine patterns of distribution and their causes. Here I will be relying on Milanovic’s tripartite framework of inequality within countries, inequality between countries, and inequality among citizens of the world, to structure the discussion. The second half will then survey some of the consequences of those patterns of distribution and will conclude by looking at some of the initiatives to tackle income inequality.

One thing that I’ve grappled with is how to integrate theories of income distribution into the course material. How do I make sure that I don’t lose students when discussing abstract subjects like value theory, the production function, and Piketty’s r > g? How do I do justice to all of the theoretical frameworks in a one-hour long lecture?

Unfortunately a shortage of recent literature on theories of income distribution makes the task of addressing these questions all the more difficult. The introductory chapter to Thomas Piketty’s Capital in the Twenty-First Century has a very clear rundown of some key debates and thinkers, but it is by no means extensive. Milanovic’s Global Inequality, and his earlier book The Haves and the Have-Nots, offer useful and entertaining discussions of theory, but these are focused almost exclusively on interpersonal income distribution (i.e. on the distribution of total income based on statistical categories such as the top 1%). Functional theories (which focus on the distribution of income between social classes or factors of production) are almost entirely absent from these two books. Finally, Agnar Sandmo’s chapter in Atkinson and Bourguignon’s Handbook of Income Distribution offers what is perhaps the most comprehensive overview of the competing theories, but has little to say about value theory and its relationship to income distribution.

For the lecture, I’ve pieced together insights from these studies and from more general readings in the history of economic thought. And I’ve decided that the best way to proceed is by examining the historical evolution of thinking on income distribution, starting first with the classical political economists. Writing during late eighteenth and early nineteenth centuries, the works of Adam Smith, Robert Malthus, and David Ricardo seem like a natural starting point for a couple of reasons.

The most obvious reason for making the classics the starting point is because they refined political economy into a science by systematically analyzing the capitalist society that was emerging in front of them. Though there are obvious differences in their respective frameworks, the classics, especially Ricardo, were also the first to develop the first functional theory to explain the distribution of income between three main social classes: workers, landlords, and capitalists. Subsequent theories of income distribution, whether focused on function or interpersonal distribution, have all been formed out of an engagement, whether explicit or implicit, with classical ideas.

In particular, subsequent theories have had to engage with what Hunt and Lautzenheiser identify as a contradiction in the classical framework, one that treats capitalism as both as system of social harmony and class conflict. In comparison to feudalism and slavery, the classics saw capitalism as a more efficient and  more just system of producing and distributing wealth. Thanks to the miracle of capital accumulation and economic growth, the self-regulating market would ensure harmonious relations between the social classes.

Yet at the same time, the classical functional theory of income distribution contained within it an implicit focus on class conflict. As Piketty notes, due to the principle of land scarcity, Ricardo thought that in a growing society rents would steadily increase as a component of national income, thereby squeezing profits and eventually stifling the engine of accumulation. Furthermore, as Joan Robinson so eloquently pointed out a long time ago, the classical labour theory of value hinted at the conflictual nature of capital accumulation. If labour alone was responsible for creating value, then why do capitalists and landlords get a share of output in the form of profits and rents?

From Marx to marginalism and Pareto to Piketty, a lot can be learned about the post-classical theories of income distribution by identifying where the sit in terms of this classical contradiction. Marx is obviously firmly planted on the side of class conflict. The marginalists and Kuznets on the side of social harmony. Pareto is indifferent, but emphasizes social stability in lieu of social harmony: the elites under any system stay the same. What makes Piketty’s work so interesting is that it can be seen as a revitalization of the non-disciplinary spirit of the classics. But does he overcome the contradiction? In other words, does Piketty’s framework, with its emphasis on forces of convergence and divergence, allow us to accurately specify the conditions under which the distribution of income will be harmonious and when it will be conflictual?

Forcing students to engage with long-term history is always risky, especially when it has to be packed into an hour’s worth of lecturing. But given the importance of the classical legacy, it seems that for the purposes of my course so much would be lost if I were to begin at a later point in time.