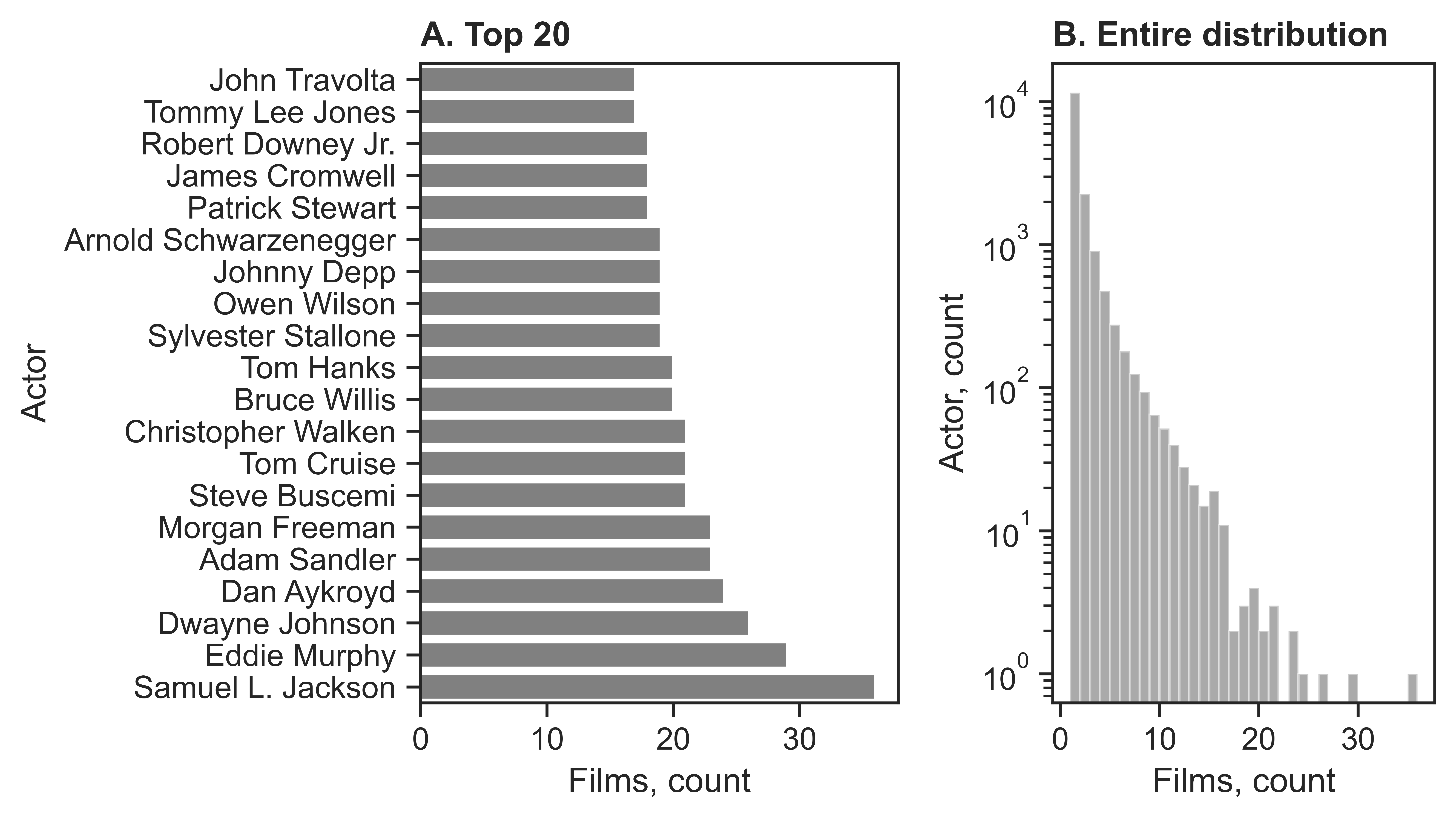 When Hollywood gets repetitive: casting

Ridley Scott’s Exodus: Gods and Kings is a telling example of Hollywood rationalizing its so-called inability to widen the boundaries of its creativity. In this case, the boundaries concern Hollywood’s tendency to reserve roles for its biggest stars, even when a big star appears unfit for the role in question.

Much of the pre-release journalism on Exodus concerned the contentious decision to cast white Hollywood actors in the story of Moses opposing the Pharaoh and leading the Israelites out of Ancient Egypt (examples 1, 2, 3). Christian Bale, who was cast to play Moses, became a de facto spokesperson for the film and attempted to diffuse some of the criticism. Bale’s defense of the casting decisions inadvertently reveals how these decisions were not made for lack of historically available alternatives:

I don’t think fingers should be pointed, but we should all look at ourselves and say, “Are we supporting wonderful actors in films by North African and Middle Eastern filmmakers and actors, because there are some fantastic actors out there”.

The obvious rationale for not casting fantastic North African or Middle Eastern actors instead of Bale and other white Hollywood actors is rooted in the financial goals of Hollywood–even Bale acknowledged this. However, such a rationale does not only downplay the racist element of this story, it actually obscures how Hollywood’s modus operandi transforms a controversial choice about casting into a so-called “rational” business decision. For instance, when Scott defended his film with the argument that he had to assemble the “best possible cast … on a budget of this scale [~\$140 million]” , he admitted to Hollywood’s interest in profit but glossed over the main reason why narrow-minded casting decisions are the so-called “best” business strategies.

If we start to ask follow-up questions about the aesthetic decisions of the film, it becomes clearer that the size and influence of Hollywood in modern cinema has a hand in making these decisions become “smart” in certain evironments. Is it necessary for a film about the Book of Exodus to cost $140 million? Is it necessary that, for the sake of entertainment, Moses bear a sword rather than a staff, or that the Red Sea be made red from man-eating crocodiles sent by God? Is it necessary that Moses be portrayed as an atheistic warrior–where God might be the hallucinatory consequence of a concussion–rather than the eventual lawgiver of God’s commandments? If the answer to each question is “No”, we actually catch a glimpse of how the casting of Bale fits into a larger story of corporate power. Hollywood is using the oligopoly of blockbuster film production and theatrical distribution to bend the curvature of modern cinema. Once bent according to its interests, Hollywood has created a financial disincentive for it to cast a film about Moses more appropriately, even when Bale claims this is what he would personally hope for: “To me that would be a day of celebration. For the actors it would be wonderful. It would be a wonderful day for humanity, but also for films and for storytelling in general”.

My cynical side thinks Bale is being disingenuous with his hope for better casting in the Hollywood blockbuster he stars in. However, the issues of repetitive or narrow casting in Hollywood are more institutional than they are individual. We can use IMDB data to demonstrate the extent of Hollywood’s repetitive casting in films above the 75th percentile in opening-theatre size. Films in this group are in blockbuster territory; they get wide-releases and money to promote and advertise at national and international scales. Consequently, Hollywood must certainly assess the risk of casting in this set of films, as their wide theatrical openings need to cover distribution and advertising costs by generating lots of revenues as fast as possible. Exodus, for instance, is above the 75th percentile in opening-theatre size in its year of release, and we just saw Bale and Scott defend casting in relation to the film’s expensive budget and the need for a star to generate blockbuster-level sales.

Table 1 helps me explain my method of gathering casting data. For each film, I gathered the first twenty actors on the cast list. With respect to actors having enough dialogue or screen-time for their roles to be memorable, a Hollywood film is rarely twenty actors deep. However, a long list of actors can achieve two things at once. First, it can account for the possibility that an notable actor is unexpectedly lower on IMDB’s cast list. Morgan Freeman’s role in Batman Begins is a good example. In Table 1 Morgan Freeman is 12th on the list. There could be many reasons why he is 12th on the list, but the important thing is that his cameo-like role in the film would have been excluded with more a selective slice of IMDB data. Second, a lengthier list of actors gives us data to investigate if repetition in casting occurs further down the list, with actors who are not stars in the public’s mind but who have secured roles in a Hollywood film. For instance, Table 1 includes actors with smaller speaking roles in Batman Begins: Mark Boone Junior as Arnold Flass; Linus Roache as Thomas Wayne; Larry Holden as district attorney Carl Finch; Colin McFarlane as Gillian B. Loeb; and Emma Lockhart as Young Rachel Dawes. Does the possession of these roles in Batman Begins increase the likelihood that an actor will have roles in other films above the 75th percentile in opening-theatre size?

The IMDB data shows that Hollywood is (a) repetitive in its casting and (b) that this strategy of repetition is translating into sector-wide inequalities in casting (if you think about it, (a) and (b) are the same thing, just written about from different perspectives; if an in-group is narrowly repetitive when alternatives exist, the out-group is repeatedly excluded). Figure 1 shows two distributions of film count per actor. Panel A shows the top 20 actors, sorted by total count of roles between 1983 and 2019. Readers will likely recognize all or some of the names in Panel A. The panel also shows signs of racial and gender inequalities in Hollywood casting: the majority of the list is white, actors of Asian descent are missing and there is not a single woman in the top 20 (the first five female actors outside the top 20 are: Julia Roberts (16 films), Sandra Bullock (15), Angelina Jolie (15), Halle Berry (15) and Carla Gugino (15)). As Yuen (2016) demonstrates through interviews with actors of color trying to secure roles in Hollywood, racial discrimination in casting limits opportunities in different ways–e.g., perceiving actors of color to be “too foreign” or not American enough in demeanor and accent, typecasting by ethnicity or skin color, and restricting acting opportunities to a narrow range of stereotyped characters. The unfairness of the biggest female stars having fewer film counts than men is not surprising when systemic gender discrimination and the role of power in distributing roles to women might be one of Hollywood’s biggest open-secrets–especially after the testimonies of many in the #MeToo movement. This prevalence of gender discrimination is also institutional, rather than being about “bad apples” in the workplace. Erigha (2019) demonstrates how Black women are repeatedly disadvantaged in securing creative roles in Hollywood filmmaking, such as directing and screenwriting. The interviews of Simon (2019) with Hollywood talent agents revealed the degree to which the job of talent representation advantaged white men; many of the prominent positions in talent agencies were held by white men and their shared beliefs that “good” masculine traits were necessary for strong job performance created exclusive networks of patrimonial mentoring, affected who was promoted to talent agent, and enabled talent agents to openly complain about the so-called “emotional instabilities” of their female clients.

Panel B in Figure dispels the belief that any role in a wide-release film will lead to other roles in big Hollywood films. There are 16,154 actors in the dataset and roughly 60 percent will only have one appearance in this set of films from 1983 to 2019. Because of this power distribution in film count per actor, elite status can be reached with only a few films to one’s name. Christian Bale, for example, is listed in the dataset six times: [Batman Begins, The Dark Knight, Terminator Salvation, Public Enemies, The Dark Knight Rises, Exodus: Gods and Kings]. This is actually a fraction of Bale’s filmography–the dataset is not counting his numerous (serious) roles in smaller theatrical releases–but what is counted in the figure puts Bale above the 95th percentile of the dataset. The actors in Panel A are all in the 99.9th percentile.

To see if repetitiveness of casting has changed over time, Figure 2 is built from rolling windows of data. Five-year windows of casting data are created first and then the film count is computed for each actor. This avoids actors with long careers skewing measurements of recent years–e.g., the cumulative film counts of Eddie Murphy or Samuel L. Jackson would beat any newcomer, whose career started in the mid-2010s. The y-axis of each panel in Figure 2 measures the inequality of every 5-year distribution as a Gini coefficient, where 0 is perfect equality and 1 is perfect inequality. The x-axis in Panel A selects the top ten actors in each window and calculates the mean of their film count. Panel B plots on its x-axis the number of films released by major Hollywood studios, smoothed as a 5-year rolling average.

Figure 2 is interesting for at least two reasons. First, rising inequality in the figure is, in this case, an effect of Hollywood being more repetitive with its top-tier, A-list actors. For example, in the period from 1983 to 1987, Dan Aykroyd was first with 6 films and the top-ten-actor average was 4.7 films; in the period from 2015 to 2019, Dwayne Johnson was first with 11 films and the top-ten-actor average was 7.5 films. Second, there is a curious non-linear path in Panel B. From 1983 to 2009, there is a tight correlation between the increase in the number of films and the increase in inequality in casting. The inflection point at 2009 puts the relationship on a new trajectory, whereby there is increasing inequality as the number of films decrease. Additional work will be needed to explain why the inflection point occurs around 2009. For now, I can make a hypothesis by drawing from Leaver (2010), who conceives of actors and their agents as a group that fights against film distributors for claims on film earnings. A-list actors cannot control the number of films released by Hollywood studios, the x-axis in Figure 2-B. Yet they have agents who can fight against new opportunities to cast actors more equitably. If casting decisions in the mid-2000s followed the historical patterns of Hollywood casting since the 1980s, the decreases to film output would have signaled a return to more equal shares of roles. But this step towards equality did not happen and we are left with a Hollywood cinema that is somehow even more repetitive than it was previously.

Palmer, B. (2014, December). “How White Were Ancient Egyptians? Not as white as Christian Bale”. Slate.