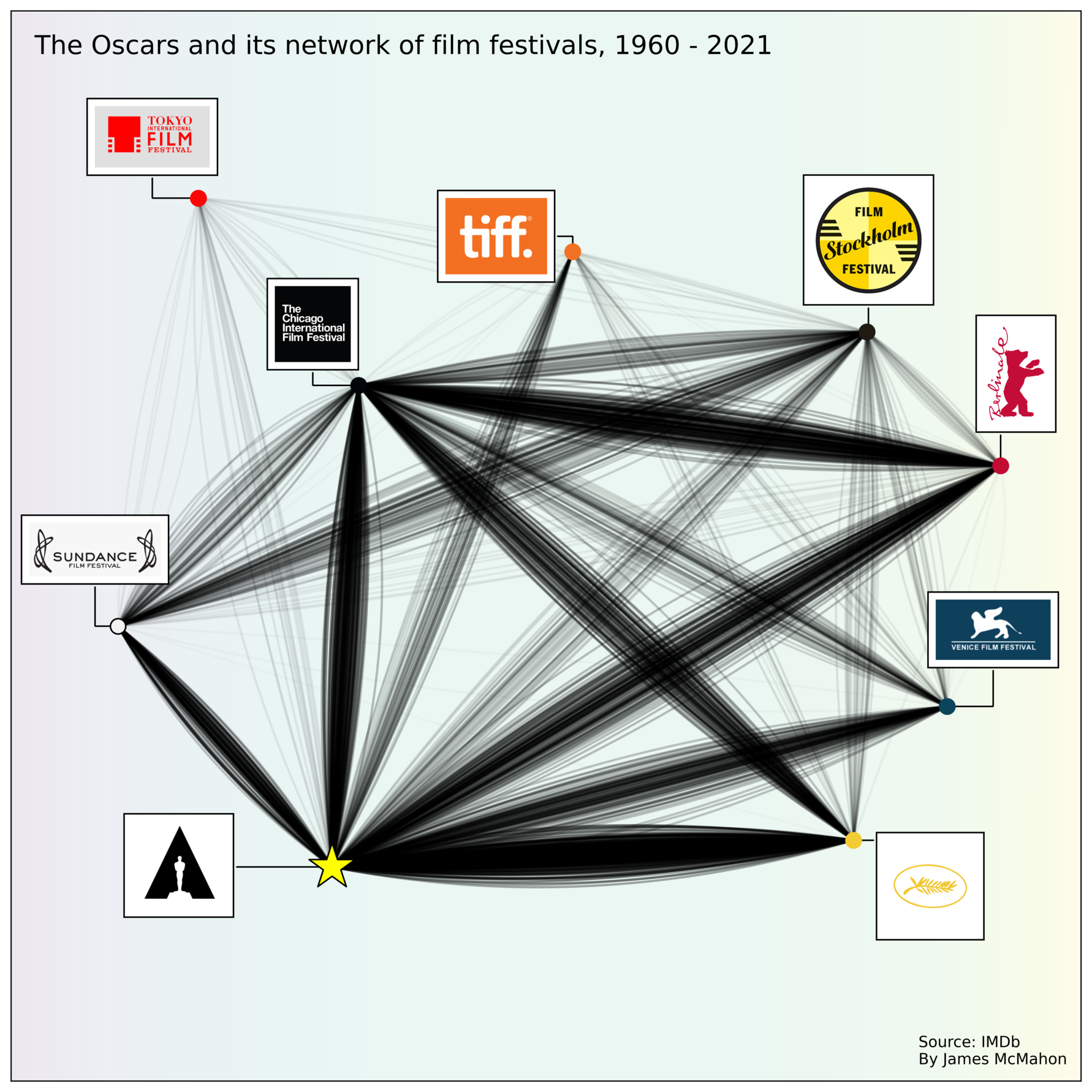 Do all roads lead to the Oscars? Part I

Sitting through the Academy Awards ceremony can be frustrating if you watch a lot of films. The breadth of your viewings has given you the perspective to see how some very good films are either receiving small numbers of nominations or are outright ignored across all categories. This type of frustration can also build months before the big night. Some of the films that the Academy Awards will come to neglect competed at international film festivals, won awards around the world, and made critics’ annual lists of the best in cinema.

Some excellent films are successful at the Academy Awards, so please do not overlook the “some” in sentence number two. Nevertheless, this post joins the conversation about the mis-judgements of Academy Award nominations. This conversation is typically qualitative in form, as film critics and scholars refer to aesthetics, the history of cinema and facts about the infamous “snubs” of past Academy Awards ceremonies.

I will construct an argument about the Academy Awards with Python code, graphs and the IMDb database. I’m aware that an argument in this form can overreach and treat movie data as an easy measure of film quality. Yet even a restrained use of IMDb data can show us things that are hard to see when our minds are focused on a particular year of the Academy Awards, or even an individual film.

We the Academy; I the film critic

A data science approach can replicate the general experiences of those who travel to numerous film festivals that precede an Oscar night. The annual festival circuit includes key stops at events like Berlin, Cannes and Sundance. Analyzing this circuit is important to understanding how and why a film festival is a successful route for films getting to the Oscars. The imagined journey works this way: a film uses a major festival to generate as much “Oscar buzz” as it can. And with enough Oscar buzz, which is some sort of synthetic journalistic-social-media fuel, a film can stay in the conversation up until Academy members vote. By being upfront in the minds of the Academy, the film that started at a film festival is nominated for an Oscar. Circuit completed.

But something else can happen. Traveling film critics, going from festival to festival, can extol films that will never be nominated for an Academy Award. With this outcome as a possibility, there are now two trajectories for film festival cinema. Some films will premiere in competition or a gala event and then go on to be nominated for an Oscar. Other films at the festival will not receive an Oscar nomination — but these films also might be the ones critics love most.

We catch a glimpse at these two trajectories with a comparison of two “predictions”. Prediction is in quotes because the first list is not exactly a prediction. The Guardian asked four of its film critics to produce shortlists for various Academy Award categories. As Table 1 shows, the collective shortlist for Best Picture was a very poor prediction of the actual nomination list — but only if we assume that the Guardian’s film critics were sincerely predicting what would actually happen. To me, the film critics were sincere, but about picking films that, being perceived to have high degrees of quality, deserve to be nominated for a best picture award. The Guardian’s film critics listed well-received films and some of them competed at Cannes and other international festivals. Titane won the Palme D’Or this year. Joanna Hogg’s The Souvenir, Part II premiered at Cannes and was listed as the best film of 2021 by Sight and Sound magazine.

Table 2 corroborates the interpretation that The Guardian film critics were not trying to predict what the Academy was going to announce. Table 2 contains the predicted list of Variety, published a few days before announcement. The high accuracy of Variety’s predictions looks impressive, but some of the predictions could have been made by even a semi-conscious film critic (hint: Belfast). Moreover, Variety is playing the prediction game without irony. As John Maynard Keynes described when using the predicted outcome of a beauty contest as an analogy for equity valuations on the stock market, the best strategy for Variety is to guess how the average Academy member will vote.

Heading to the Oscars via film festival

In our case, Oscar night is the ultimate destination, and we want to know if films are arriving at this destination via film festival. We frame the problem this way because it allows us to build a network of film festivals and to understand the impact of this network on the total list of films that get nominated for at least one Oscar.

Table 3 is a simplified representation of what I am doing to prepare the data for analysis. I first retrieved the unique IMDb IDs of every film to be nominated for an Academy Award from 1960 to 2021. This list of unique IDs can be used to count the number or connections on the film festival network. If a film appears in a film festival column and the Oscar column, we count this as one travel across this path, or “edge” in graph speak.

Figure 2 presents the international film festivals that are included in the analysis. Festivals can have long official titles, so I will be referring to each of them in shorthand: Berlin, Cannes, Chicago, Stockholm, Sundance, Toronto, Tokyo, and Venice. These festivals comprise only a fraction of all the film festivals around the world, but these ones are major in terms of prestige, international competition and media attention. In fact, in the eyes of some critics and filmmakers, winning the Golden Lion at Venice or the Palme D’Or at Cannes would be a better indicator of a film’s artistic merits than winning an Oscar (Ortner, 2013).

The following two figures present the strengths of the relationships between the Academy Awards and this network of major film festivals. In the first figure we have every connection between 1960 and 2021. I use a high transparency to differentiate the paths with lots of films from those with only a few. For instance, only 14 films competed at Tokyo and were then nominated for an Oscar. By contrast, the connections of some festivals with the Academy Awards total over one hundred: Cannes (219), Chicago (131), Berlin(125), Sundance (106), Venice (106).

Chicago placing second, behind Cannes and ahead of Berlin and Venice, might turn some heads. Chicago’s strength is likely a feature of the network being undirected — i.e., the Chicago-Oscar has an inflated count because some festival films were re-released en route, in the meantime between a bigger festival and the Oscars. A future version will try to incorporate the direction of chronology — e.g., a film goes to Berlin and then to Chicago, and then to the Oscars. A directed network is also more accurate in terms of film festival guidelines. Such festivals as Berlin, Cannes, and Venice require that their respective films in competition have never premiered before, at any festival.

The second network simplifies the visual by providing an average connection per year. The annual average accounts for the different ages of festivals. Some, like Toronto, only reached “major” status in the last twenty years.

To be continued: Does a festival help a film become Oscar-bound?

We now have a better sense of the connections between international film festivals and the Oscars. But does it matter? On its own, the network looks impressive; and its impressiveness might be amplified by our imaginations that Hollywood executives, producers and A-list actors go to these festivals for business and pleasure.

The next part of this post will situate the festival circuit within the bigger context of Oscar-worthy cinema. As Figure 5 shows, the films that go to the Oscars via one of these major festivals is a fraction of the total number of films at each Academy Awards ceremony. In fact, the next post will explain that Figure 5 is still too idealized — if you get your film into a major film festival, don’t start imagining yourself giving an Oscar acceptance speech just yet …

Ortner, S. B. (2013). Not Hollywood: Independent Film at the Twilight of the American Dream. Durham and London: Duke University Press.