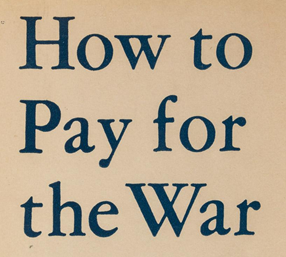 The birth of capitalized credit money is inextricably bound with war

During the twilight of feudalism, wars, whose cost soared in tandem with their material scope and unit price, were the most financially demanding expenses.

Changing military technologies, beginning with the crusades and continuing with the Hundred Years War, made it increasingly necessary to rely on hired armies that needed to be paid in cash.

There were two ways to raise the money – taxes and borrowing – but it was their combination that proved the most effective.

The first to brave this new form of war finance were the Lombardian city states. They issued tax-backed bonds, using the proceeds to pay for soldiers and weapons that waged increasingly successful campaigns against barter-backed knights.

The territorial princes and kings were initially hostile to this new arrangement. But having witnessed the lethal force of the new pecuniary militias unleashed on their increasingly expensive knights, they found the temptation of fight-now-pay-later difficult to resist.

Gradually, they began to borrow the methods and money of the bourgeoisie, with the result being a growing interdependency – and eventually a bondage – between the territorial sovereign and the exterritorial capitalists.

In due course, this alliance would develop into a new mode of power, a social space we now call the ‘capitalist nation-state’.

The collection of ad-hoc levies and duties was not only unpopular, but also grossly inefficient and extremely time consuming. Therefore, in the interest of expediency, the kings often took a shortcut, announcing a convenient ‘state of emergency’.

The bourgeoisie was forced to foot a growing part of the bill; but by now it was already too powerful to give something for nothing. In return for taxation it demanded representation – this time on a ‘national’ scale.

Government taxes, though, constituted only one aspect of the new deal. The other aspect was private credit, and the two got inextricably bound up.

Facing the prospect of war, the king, even if fiscally solvent, was often financially liquid. Taxes could be collected in the future, but the need for cash was immediate. His solution was to turn to haute finance with its easily accessible stash of money.

For the financier, the request offered a huge investment opportunity: a royal promise to augment his capital with future taxes.

Initially, the arrangement was fraught with peril, and although both sides resorted to it with much enthusiasm and growing frequency, often they got burned.

During the Hundred Years War, for example, Kind Edward of England financed his invasion of France with an estimated 1-1.5 million gold florins borrowed from the Florentine banks of Bardi and Peruzzi and backed by an expected wool tax.

The tax revenues, though, proved disappointing, and the two banks, unable to collect their loans, crashed, creating a chain reaction of bankruptcies throughout Northern Italy.

But time heals, and by the early nineteenth century war finance had already been perfected into business as usual. During the Napoleonic Wars, an English expeditionary force, headed by the Duke of Wellington, got stuck in Portugal, besieged by a ‘terrible need of funds’.

Wellington borrowed money from shabby continental banks against massively discounted British government bonds, but the money was like a drop in the bucket.

Unpaid soldiers resorted to looting; wounded officers had to sell their clothes to secure medical attention; and with its wallet empty, the army’s attempt to have the local population turn against French rule was going nowhere.

Wellington was ready to give up, but just as all seemed lost, the Rothschilds came to the rescue. Earlier on they had collected many of Wellington’s discounted British government bills at a fraction of their book value, and they now cashed them at an enormous profit in London

In addition, they also bought some £800,000 worth of gold at bargain prices from the East India Company – bullion that they were more than willing to sell back at ‘fair value’ to the needy British government.

The Rothschilds also took it upon themselves, again for a proper fee, to transfer this money from England to the Continent, and they continued to do so for a number of years, funnelling as much as £20 million to the British troops.

The transfers were even encouraged by the French authorities, who were misled to believe that the money represented private capital flight in expectation of British devaluation.

And so, almost seamlessly, war and organized violence – nominally the archenemies of the ‘free market’ – had been absorbed into capital.

On the one hand the capitalists used inflation to destroy the military power of the nobility, while on the other hand they financed ‘national’ wars to multiply their capitalization many times over.

And war was merely the beginning of this public–private bondage. In due course, capital has been able to internalize not only organized violence, but every systematic aspect of government power.

For more details of the co-development of capitalized credit money and war, see Chapter 13 of Capital as Power.