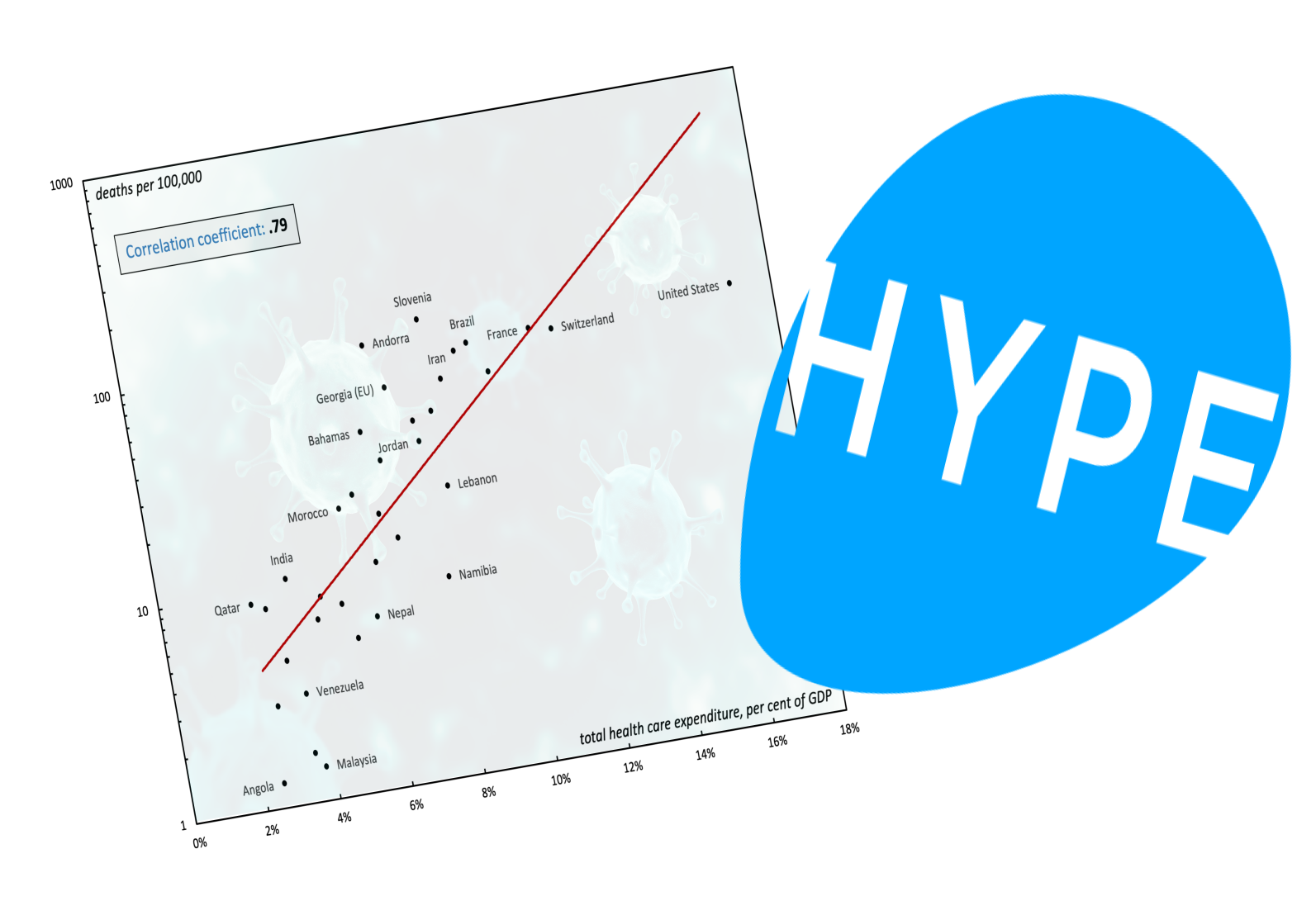 In his prize-winning paper, Chris Mouré addresses the longstanding debate over public versus private healthcare. His window into the debate is the COVID-19 pandemic. How, Mouré asks, does healthcare spending relate to COVID-19 death rates? And is this relation effected by the level of healthcare privatization?

Before we get to his answer, let’s frame the healthcare debate. According to private-sector advocates, firms are more ‘efficient’ at delivering healthcare than are their public-sector counterparts. The reason, advocates claim, is that competition between firms drives down costs and increases performance. Since the public sector is not disciplined by competition, it tends to be bloated and wasteful. Or at least, that is what neoclassical economics would have us believe.

Mouré notes, however, that if we view private healthcare through the theory of capital as power, we get a very different conclusion. According to this theory, private-sector profits don’t come from productivity. They come from the purposeful limitation of human activity — what Nitzan and Bichler call strategic sabotage. And so private-healthcare profits signal the sabotage of societal health.

With these opposing views of healthcare in mind, Mouré looks at how different countries faired in their battle against the COVID-19 pandemic. He divides countries into two groups:

Next, Mouré looks at the relation between COVID-19 deaths and the relative size of healthcare spending. Let’s preface this analysis with some expectations. If healthcare is ‘efficient’, we’d expect that greater spending would lead to fewer COVID-19 deaths (per capita). Interestingly, Mouré finds no evidence for such an effect (a result that needs to be dissected in future research). However, he does find evidence for the opposite trend. In a specific group of countries, Mouré finds that greater healthcare spending led to more COVID-19 deaths. Can you guess what unifies this group of countries?

They all had relatively privatized healthcare.

Figure 1 shows Mouré’s most damning evidence. Here he has categorized countries by the size of ‘private non-out-of-pocket’ spending relative to public healthcare spending. To make sense of this data, know that Mouré is quantifying healthcare privatization in terms of the spending of the private sector. Second, know that there are two main categories of private healthcare spending. First, there are ‘out-of-pocket’ fees that are paid directly by patients. Then there is all the other private-sector healthcare expenditure, which Mouré calls ‘non-out-of-pocket’ spending. The vast majority of this latter spending, Mouré argues, comes from insurance companies. 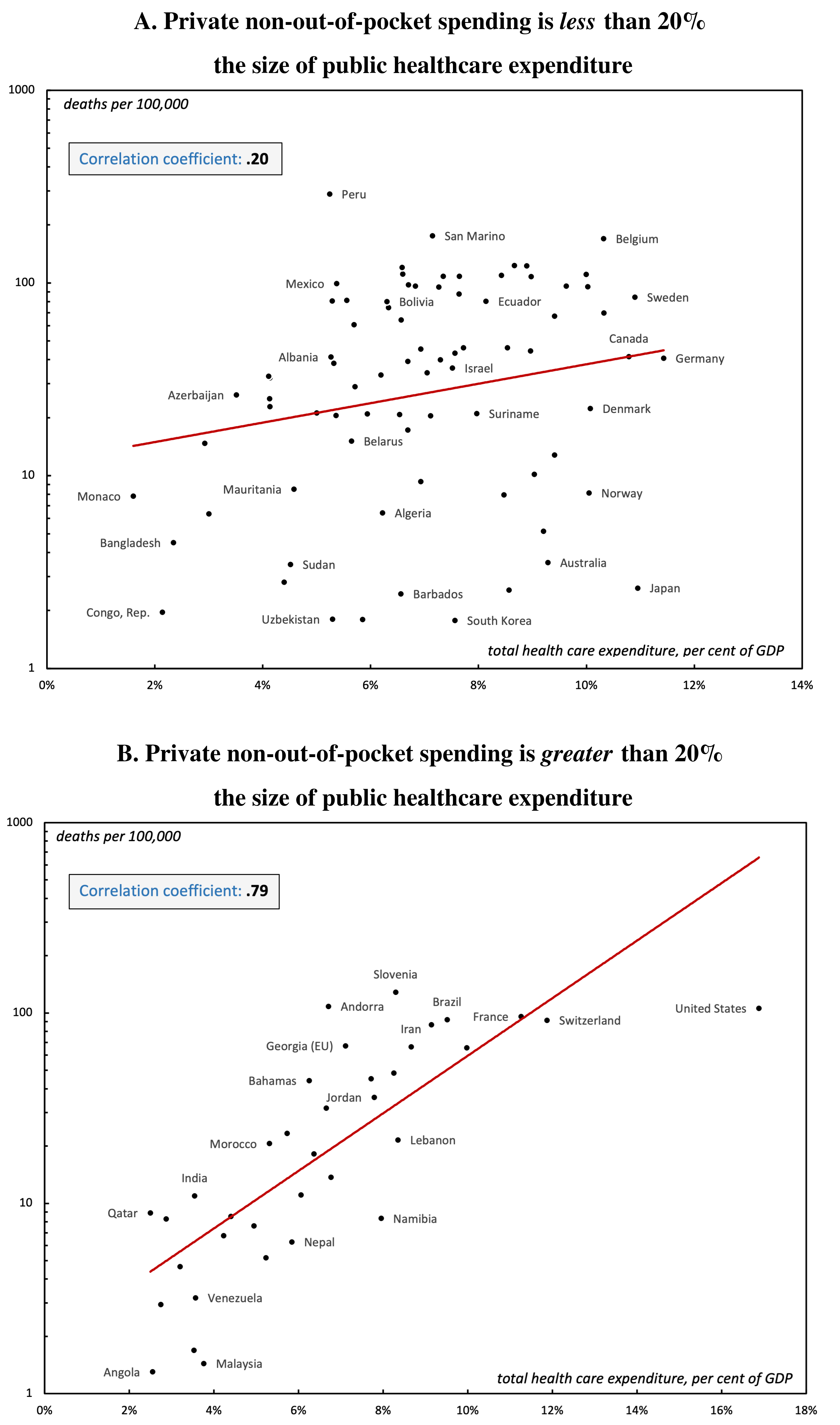 Mouré’s results are sure to spark controversy. And he admits that his analysis is exploratory. Still, his work pours cold water on the arguments for private healthcare.

So what’s behind his results? A plausible answer, Mouré argues, is that in its drive for profits, private-sector healthcare invests largely in specialized (often elective) services. It tends to neglect basic care and emergency services. And, of course, private clinics turn away patients who can’t pay. The result, Mouré posits, is that private healthcare performs poorly during pandemics. In short Mouré’s work suggests that the supposed ‘efficiencies’ of private-sector healthcare are, in fact, quite costly.

He starts by noting that ‘power’ is usually thought to have two sides. It can mean either the ability to force action, or the ability to forbid action. Most philosophers, Di Liberto argues, separate the two forms of power. The premise of his paper, however, is that both sides often occur together. That is, elites suppress resistance by channeling people into activities that are (for the rulers) more benign.

This behavior, Di Liberto observes, long predates capitalism. For instance, when the Persian king Cyrus the Great conquered Lydia, he was faced with an imminent rebellion. But instead of using his military might to suppress the revolt, Cyrus opened brothels, taverns and gambling halls. The Lydians were so engrossed by these amusements that their revolt never came.

Di Liberto thinks that this strategy of distraction and diversion can be best understood as ‘hype’. It is a form of power that combines the appeal to ‘creativity’ and with the imposition of ‘order’ — or what Nitzan and Bichler call creorder. The idea is that to suppress resistance from below, elites hype activities that are suitably innocuous.

While this strategy is not new, Di Liberto argues that with capitalism, hype has become ‘systemic’. In particular, he thinks hype tends to come in waves, and is centered around euphoria over a new technology. Consumers buy into the hype, but so do capitalists themselves. And so the result is a wave of hype that drives up asset prices. If you lived through the 1990s, for instance, you might remember the dot-com boom and bust. But that ‘hype cycle’, Di Liberto argues, was just the latest in a long series of waves driven by ‘systemic hype’.

Backing up a bit, Jonathan Nitzan and Shimshon Bichler consider ‘hype’ to be a key element of the ritual of capitalization. However, it is a behavior that is poorly understood. Di Liberto’s paper offers a welcome contribution to our understanding of hype.

Thank-you to everyone who submitted a paper to the Capital as Power essay competition. We enjoyed reading your work, and we look forward to next year’s competition. In the mean time, you can read all of previous prize-winning papers here.

Nitzan, Jonathan and Shimshon Bichler. 2009. Capital as Power: A study of order and creorder.. Routledge.