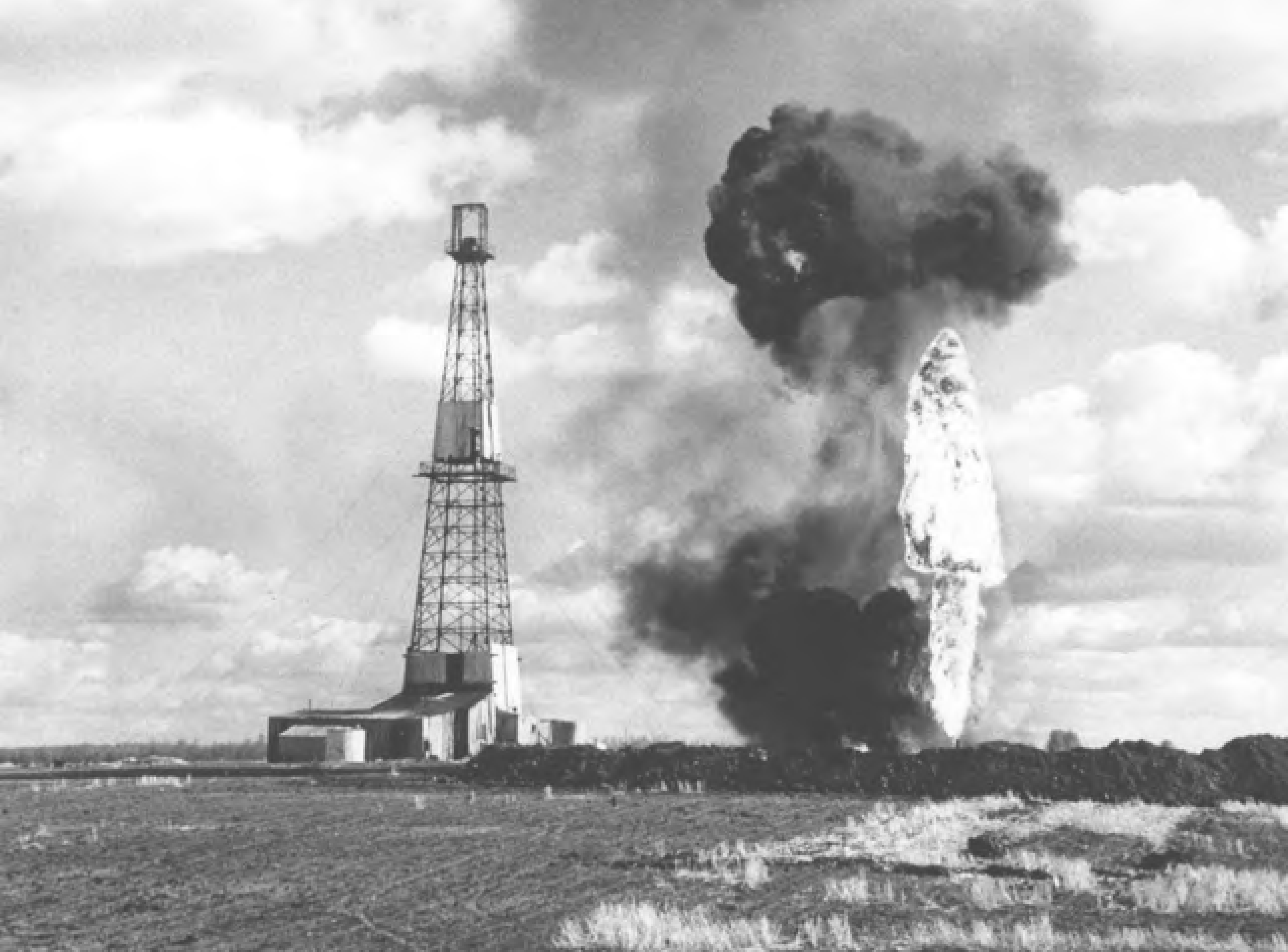 Author’s note: At the end of the First Cold War, Canada tried to make the polluter pay. This resulted in the United States launching an unknown, but successful coup in Alberta over the course of 1991-92. And the results of that coup are the single biggest threat to a liveable future.

This three-part series will document the secret January 17th 1991 ‘no-lookback’ deal over oilfield cleanup, the December 5th 1992 selection of Ralph Klein as the leader of Alberta’s governing party, and the April 9th 2003 US recognition of Alberta’s oilsands as “bankable” reserves.

The Supreme Court of Canada rejected the oil and gas industry’s appeal of the Northern Badger case over polluter pay on the first anniversary of the US regulatory coup, January 17th 1992.1

It was the last gasp of Canadian efforts to assert independence from “the political masters in Washington”2 at the end of the First Cold War. But it was already too late.

The Canadian defense of polluter pay was concerted. The efforts of the executive, administrative, and judicial branches of provincial and federal government – in coalition with the accounting industry, the banking sector, the media, and public opinion – should have overcome America’s January 1991 ‘no-lookback’ interference.

And it would have been enough to resist the regulatory coup, if not for the political dimension of US subversion. If not for Ralph Klein.

Calgary is the headquarters of Canada’s oil and gas and bitumen industries. Ralph Klein was mayor, 1980-89, and hosted the successful 1988 Olympics. He ran in March 1989’s provincial election and was appointed environment minister just as Canadian efforts to assert polluter pay were coming to surface.3

But even a consensus of Canadian institutions proved no match for a hostile premier serving the world’s richest and most powerful industry.

In April 1991, the coup’s regulatory tool — ‘Alberta’ oil and gas regulator, John Nichol — gave a speech informing industry of the secret ‘no-lookback’ deal that meant they wouldn’t have to worry about paying for cleanup — regardless of what the law or courts or public opinion may say. April also brought disingenuous calls for royalty cuts, which were obediently delivered in time for 1991’s Christmas bonuses and repeated again the next year.4

Some extra walking-around-money was no doubt nice, but the regulatory coup required a political tool to thwart the Canadian consensus on polluter pay. Amendments to Alberta’s ruling party constitution also adopted in April 1991 created what Americans call an “open primary” for the Alberta Conservative Party’s 1992 leadership convention.

“Initially the Party was quite proud of its new democratic credentials”, University of Calgary political scientist Ted Morton wrote. “But … they have had significant and unintended consequences. … The rules favour ‘outsider’ candidates over candidates supported by the Party Establishment.”5

But before we can explain Klein’s triumph as a Party outsider in December 1992, we have to rewind to the year’s opening to see how the stage was set.

Although he knew better, coup tool John Nichol told the reporter covering Canada’s top court upholding polluter pay in January 1992: “It’s certainly going to hurt … But that’s the oil and gas business. You can’t just drill wells and walk away from them.”6

Alberta’s energy regulator has tried to hide both records, but we know from two smoking gun documents that officials from the provincial regulator (as well as the provincial departments of energy and the environment) met with industry lobbyists on January 17th 1991.7

We know that, despite the Canadian consensus on polluter pay, contrary “principles were agreed to” at that meeting — the same day the US first fully-flexed its hegemonic muscles in Iraq, asserting the Bush Doctrine of ‘What we say goes.’8

When bankers publicly accepted the polluter pay principle in November 1991, the same group that had struck the ‘no-lookback’ deal immediately established a subcommittee to deal with the crisis of bankers abandoning polluters.

The coup’s subcommittee put its recommendations for incorporating the secret ‘no-lookback’ deal into oil and gas regulation in a 46-page report summarizing 10 months of work. They submitted their report two days after CAPP held its fake cleanup conference in Calgary in November 1992.

One of the subcommittee’s first orders of business had been meeting with the Canadian Bankers Association, who were obviously brought onside the coup and set about organizing a hoax of a newspaper series on oilfield cleanup to help cover the coups’ tracks.

In the spring of 1992, the provincial newspaper of record sent two reporters into the field for two months to report on the repercussions of the Northern Badger court case upholding the polluter pay principle.

The resulting series, “Big Oil, Big Cleanup”, consisted of multiple articles each over multiple days. It remains the most incredible journalism on these issues, before or since. Everyone was talking about how many skeletons were in the closet and how they were all getting cleaned up now.9

Except we now know that the Edmonton Journal series was fake.

No one ever cleaned up anything extra after Northern Badger. So while industry executives and professionals might have talked a good game for reporters in the summer of 1992, they never actually cleaned anything up.

They didn’t have to. They had a ‘no-lookback’ deal in their inside pocket.

Adding insult to coup-ery, the evidence that no one ever cleaned anything up has been staring us in the face for decades. The most ubiquitous chart (below) in the long debate over ‘orphan’ oil and gas wells in Alberta shows the dramatic growth of inactive wells in recent decades:10 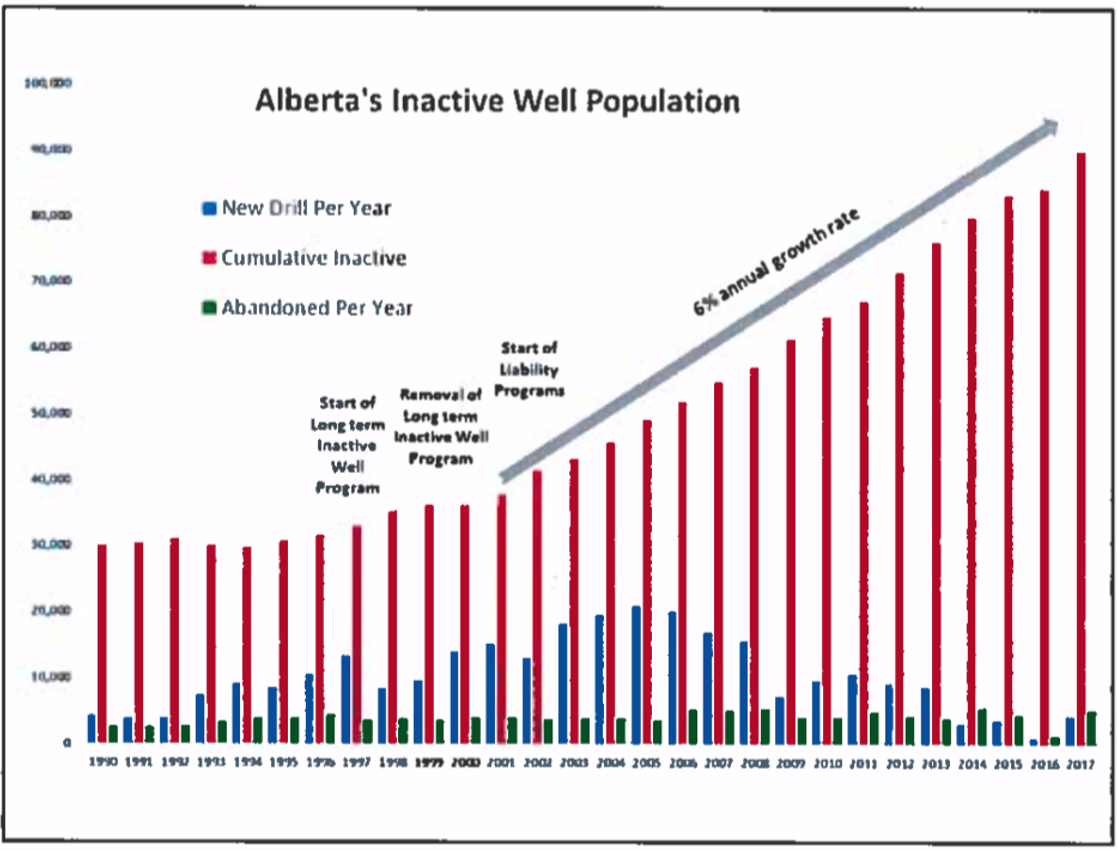 The explosion of inactive wells after industry executives were exempted from legal liability over cleanup in 200011 has always been obvious from the chart, but what the underlying data proves is that Northern Badger never caused anyone to cleanup anything in the first place.

The Alberta Energy Regulator (AER) had always refused my requests to share the spreadsheet underlying the above chart. They refused when Canadian journalists asked. But when a Canadian stringer for the New York Times asked the AER, it must have confused them; they released the spreadsheet.

No cleanup is a curious result of the Canadian consensus on polluter pay if Albertans are independent of foreign domination and live in a democracy that respects our wonderful energy law. No cleanup is less confusing, however, if there was a secret deal promising the world’s richest and most powerful industry it would never have to clean up after itself.

And when the Alberta Liabilities Disclosure Project’s cleanup estimates are combined with the lack of profits in Alberta oil and gas since 2009, it is obvious that the oilpatch has been looted well past solvency:12 Not only has the polluter not paid, but ‘Alberta’ regulators have also stood idly by while the polluter has plunged hundreds of billions deep into insolvency. Alberta’s oil and gas industry has not behaved according to provincial or federal law. But the oilpatch has behaved according to the Bush Doctrine, which includes the imperial principle that the US polluter will not pay.

The Bush Doctrine rules in Alberta still, but we know from the spreadsheet shared with the NYT, that it also had immediate effect. No one cleaned up anything more in 1991 or 1992 than they had in 1990. The polluter never ever paid.

That also means that one of the (if not the) first publication(s) of the Canadian Association of Petroleum Producers (CAPP) — a cleanup manual — was fake. And that means CAPP’s oversubscribed cleanup conference in Calgary on November 16th 1992 was also fake.

All this raises supreme suspicion about Party newcomer Ralph Klein and the sale of 120,000 new Party memberships (still a Canadian record?), including tens of thousands at the polling booth doors at second round voting on December 5th 1992 that gave Ralph Klein a landslide.13

While drilling new wells in Alberta had been down 30% in 199214 – supposedly because of Northern Badger – it sprang back to unexpected life in 1993 under Alberta’s new premier, who then easily sailed his new oil-fueled ship to victory in June 1993’s provincial election victory. Klein’s first term saw the ‘no-lookback’ coup consolidated and neoliberal austerity administered.

Part three of this series will pick up the story after Klein’s Conservative Party secured a second term in 1997. A seven-member subcommittee of the Alberta Securities Commission’s Oil and Gas Taskforce would set about in 1998 to rig Canadian securities markets. Six months after the US occupation of Iraq, the Taskforce succeeded …