New Estimates for Britain and the United States

This note presents new long-term estimates of what Jonathan Nitzan and Shimshon Bichler have named the ‘buy-­to-­build indicator’, which is calculated as the value of mergers and acquisitions as a percentage of gross capital formation.

This note presents new long-term estimates of what Jonathan Nitzan and Shimshon Bichler (2009: Ch. 15) have named the ‘buy-to-build indicator’, which is calculated as the value of mergers and acquisitions as a percentage of gross capital formation. According to Nitzan and Bichler (2009: 338), ‘this index corresponds roughly to the ratio between internal and external breadth’, which are two of the four ‘sub-routes’ that dominant capital takes to ‘accumulate differentially’ (2009: 329). Expenditure on mergers and acquisitions indicates how much is being invested in already-existing assets, while gross capital formation is roughly equivalent to green-field investment (that is, investment in new productive capacity). The ratio between the two — the buy-to-build indicator — thus shows which of these two ways of expanding is most prominent at a particular moment in time.

It is Nitzan and Bichler’s (2009: 331, 338-39, 359) contention that buying has increasingly come to predominate over building since the late nineteenth century because buying already existing capacity reduces the risk of glut, whereas building new capacity increases it. Consequently, they argue, capitalism has seen a tendency ‘for chronic stagnation to gradually substitute for cyclical instability’ (2009: 331), as corporate amalgamation has become the ‘main engine of differential accumulation’ (2009: 332). Only when some temporary barrier to further amalgamation is met does the wave of amalgamation subside, typically leading to a period of stagflation, as dominant capital instead accumulates differentially through ‘external depth’, which occurs through stagflation, as dominant capital limits production, in order to redistribute income in their favor through inflation. These pendular swings from external depth to external breadth and back again provide the basic rhythm of the capitalist mode of power. It is important, therefore, that they are correctly measured.

This note provides two new series of buy-to-build indicators. Estimating them, it should be stressed, is not simple, principally due to the absence of consistent series for expenditure on mergers and acquisitions. Nevertheless, as this note describes, it has proven possible to calculate them for both Britain and the United States. For Britain, the new estimates build principally on the research of Leslie Hannah (1983), as well as official government statistics, while for the United States, they represent significant revisions of Nitzan and Bichler’s own original estimates. The note concludes with some observations on the new series, including on how they affect (or not) Nitzan and Bichler’s narrative. 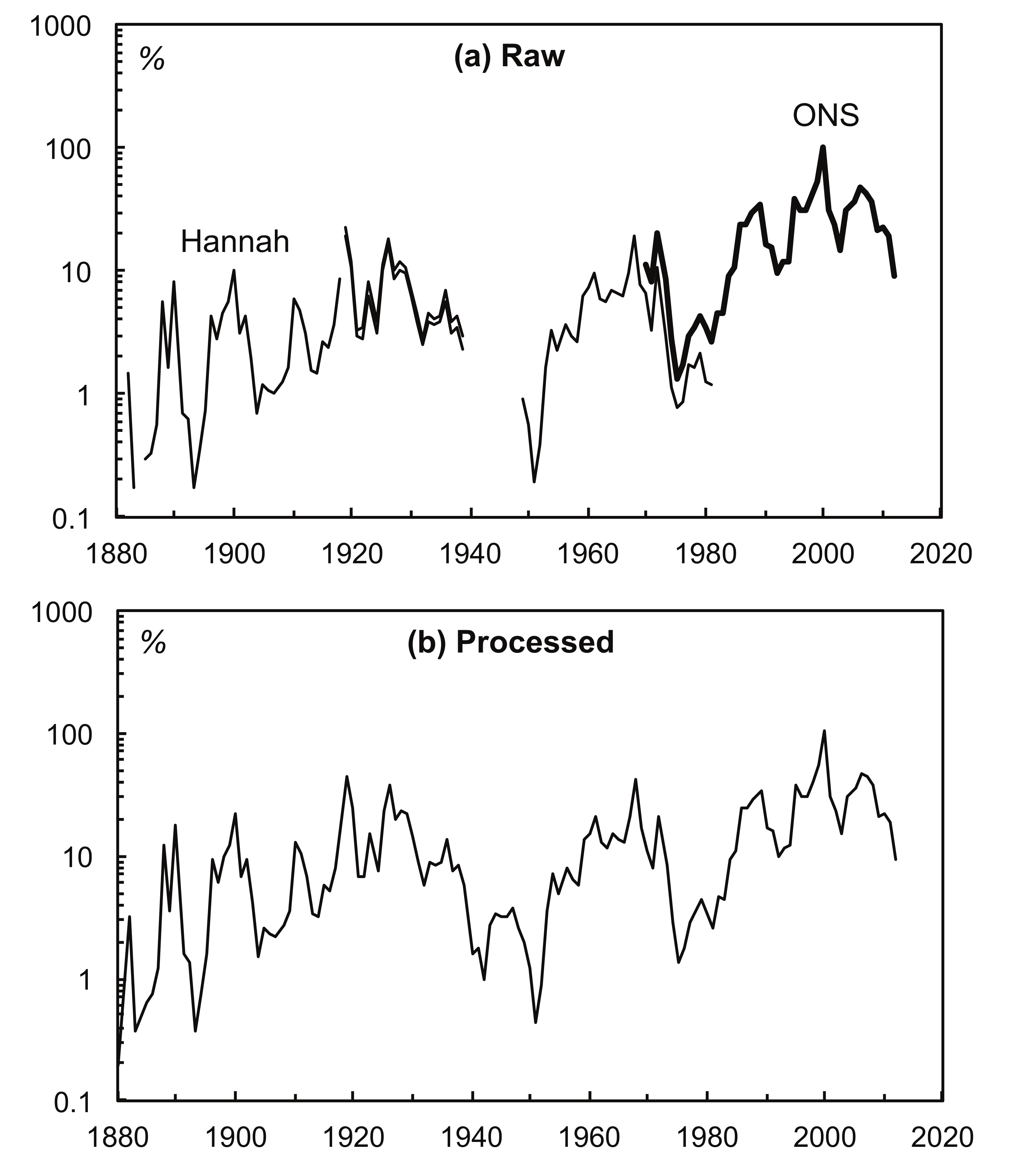 Simple ratio splicing was used to join the Hannah and ONS series. Hannah’s series was adjusted upwards according to the average ratio between the two during 1965-81, in order to roughly compensate for the absence of non-manufacturing mergers and acquisitions in Hannah’s series. During 1919-39, Hannah gives low and high estimates of the value of mergers and acquisitions in manufacturing, so the average of the two was used. The gap in Hannah’s series between 1939 and 1949 was filled through exponential interpolation, adjusted following the variations in a proxy that was construct by multiplying the number of mergers and acquisitions by the Actuaries General Share Price Index, then dividing it by gross fixed capital formation.2 The continuous buy-to-build indicator that resulted from this processing can be seen in part (b) of Figure 1.

Constructing a series for the United States is more difficult because the data on mergers and acquisitions are less consistent and somewhat scarcer.3 Seven sources can be identified:

Once these series were compiled, each was divided by a series for gross fixed capital formation,6 leading to six separate buy-to-build indicators. The results can be seen in part (a) of Figure 2. 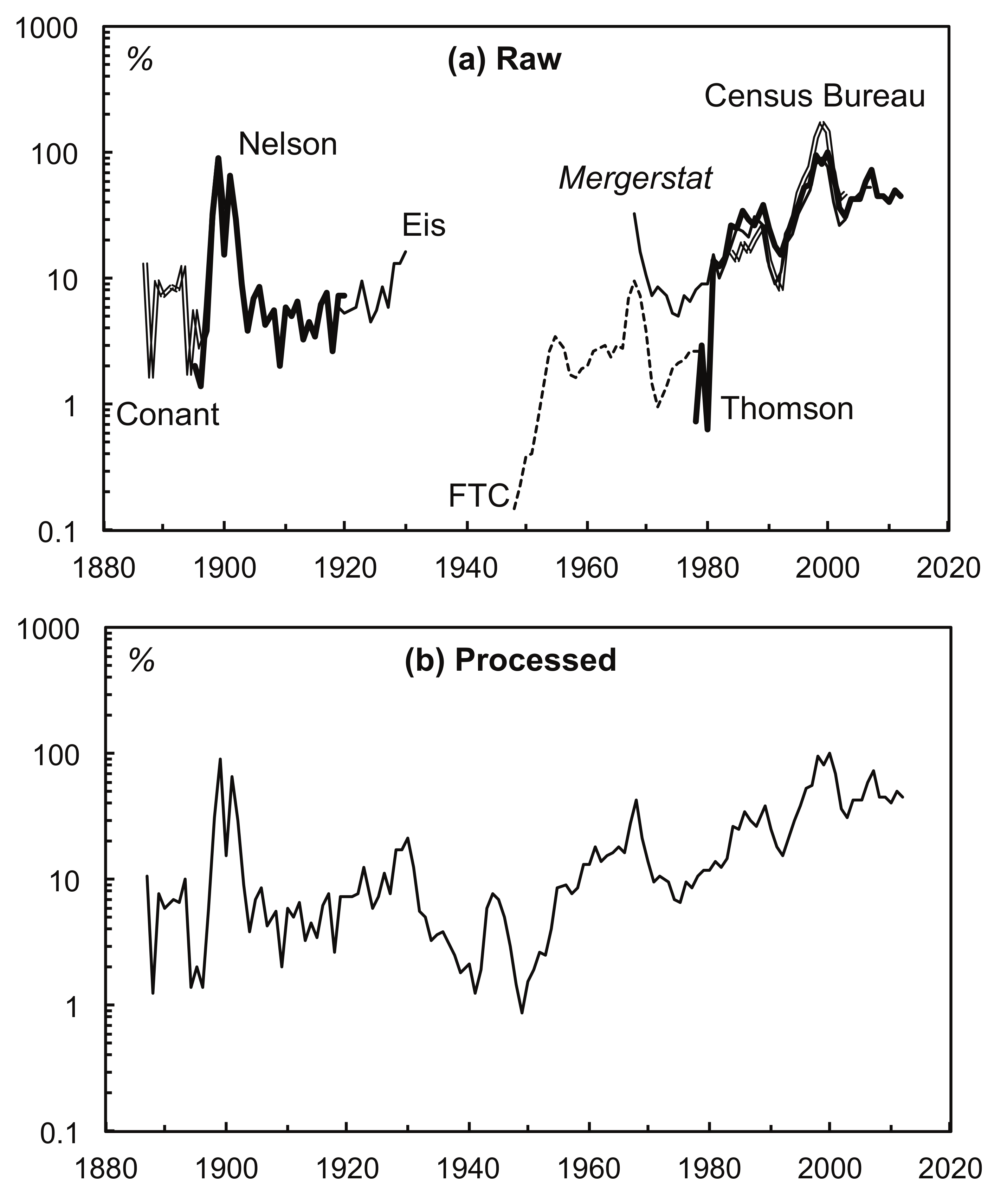 Processing the various separate buy-to-build indicators was more complicated than in the case of Britain. Two series were used as bases. First, the indicator calculated from Nelson’s estimates for 1895-1920 was taken as a base, then extended to cover 1887-1930 using the Conant and Eis indicators, adjusted according to their average ratios with Nelson’s series during their overlapping periods. Second, the Thomson indicator was used for 1981-2012,7 then extended back to 1968 using the Mergerstat Review series, again adjusted according to their average ratios with the Thomson indicator. The result was two series, covering 1887-1930 and 1968-2012 respectively. Interpolation to cover the gap between the two series was carried out in the same way as for Britain: exponential interpolation adjusted according to variations in a series of the number of mergers and acquisitions multiplied by a share price index,8 divided by the series for gross fixed capital formation. The result was the processed series shown in part (b) of Figure 1.

Three main observations on the new series can be made: 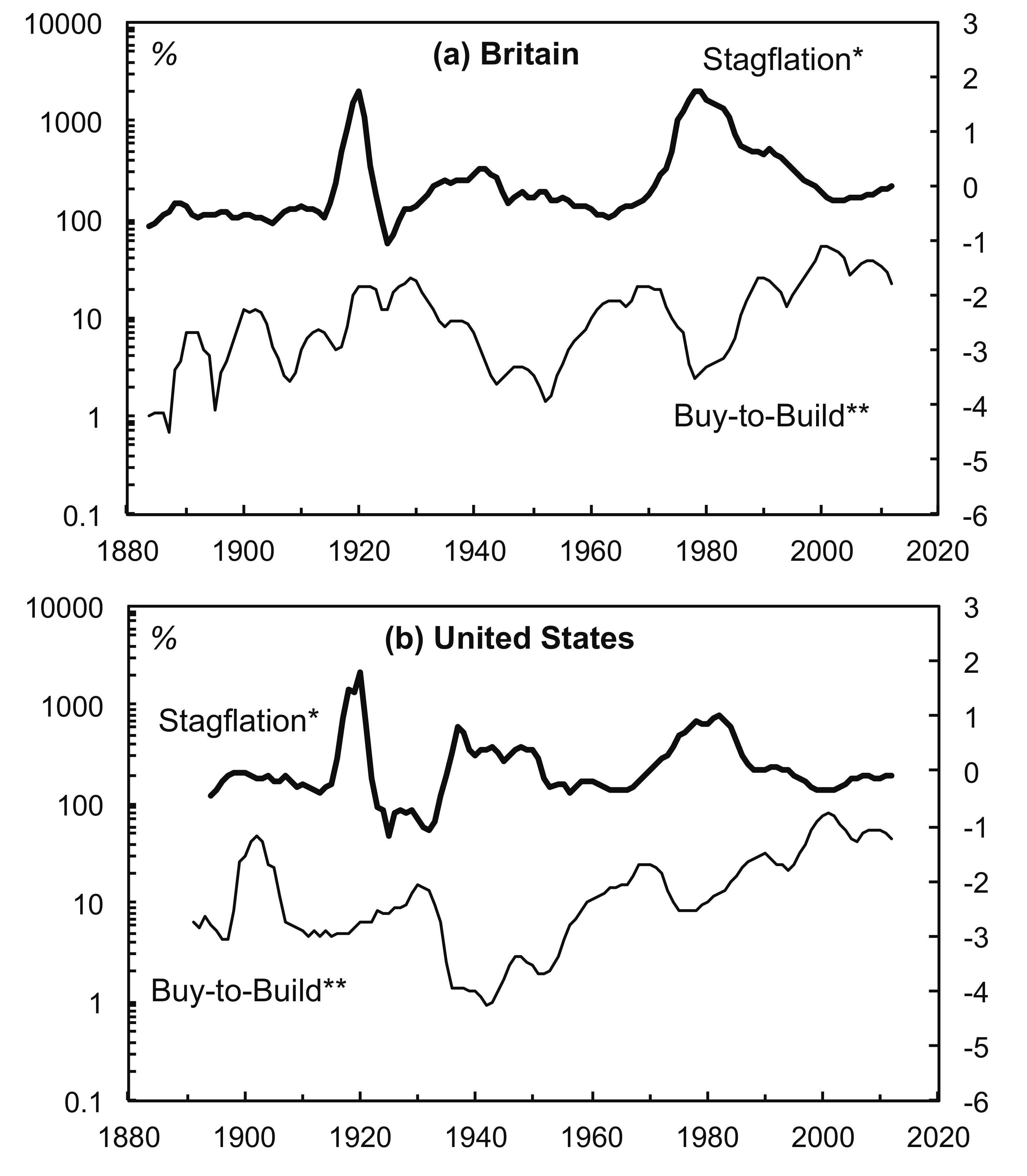 ** Expenditure on mergers and acquisitions as a percentage of gross fixed capital formation.

Note: Both series are smoothed as backward-looking 5-year moving averages. The lefthand axes are shown on a Logarithmic scale. Sources: See text.

Joseph Francis is a Ph.D. candidate in Economic History at the London School of Economics. This note draws on research that has been supported financially by the Economic and Social Research Council and the London School of Economics. Jonathan Nitzan and Roman Studer commented on an earlier version, although neither is responsible for any errors that remain. The workbook with the raw data and processing described is available at http://joefrancis.info/databases/Francis_buy_to_build.xlsx.

Nitzan, Jonathan and Shimshon Bichler (2009) Capital as Power: A Study in Order and Creorder (London: Routledge).

US Bureau of the Census (1975) Historical Statistics of the United States: Colonial Times to 1870 (2 vols., Washington, D.C.: US Government Printing Office).