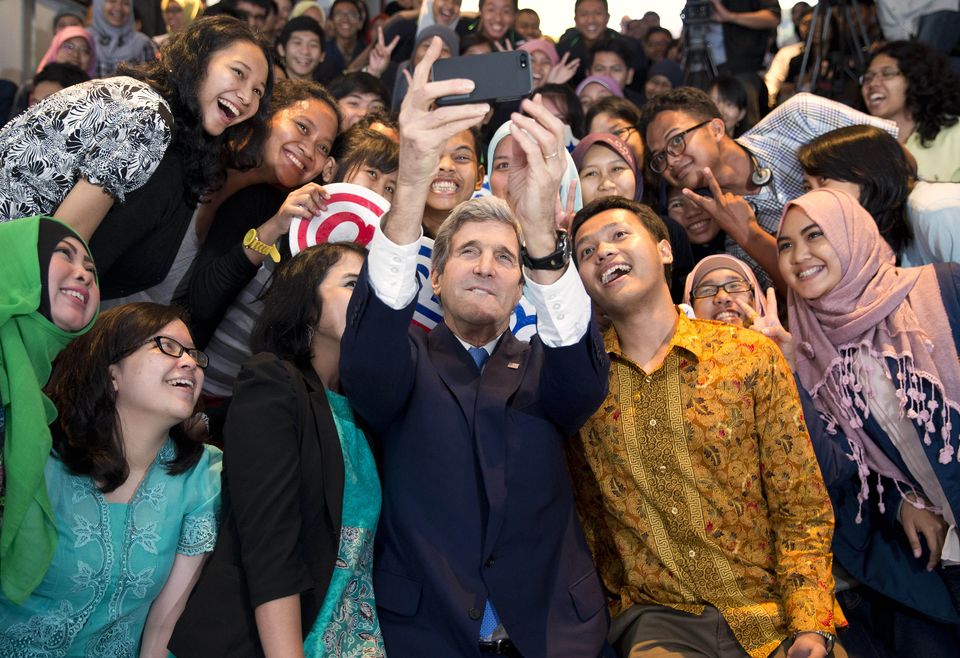 How sincere is Mr. Kerry about climate change?

Speaking to students in Jakarta, Indonesia, US Secretary of State, John Kerry, declared a few days ago that climate change is the world’s “most fearsome” weapon of mass destruction. Likening climate change to terrorism, Kerry stated that “It doesn’t keep us safe if the United States secures its nuclear arsenal while other countries fail to prevent theirs from falling into the hands of terrorists,” also adding  “Terrorism, epidemics, poverty, the proliferation of weapons of mass destruction: all challenges that know no borders.” Judging from these words, one would think that either the US is planning to send in the army to invade the countries that are carrying out such terrorist acts or the Obama administration is thinking of droning them out of existence. Especially to the mostly Muslim population of Indonesia these familiar words must have set alarm bells ringing all over the place. The trouble is, as with the weapons of mass destruction, the US either looks to find them in places they don’t exist or is itself often caught using such weapons. To make the parallels Kerry draws between weapons of mass destruction and climate change even worse, the US has both the largest arsenal of weapons of mass destruction and the second worst record (recently surpassed by China) in CO2 pollution in the world.

It must be admitted, however, that equating climate change with terrorism is a smart move and a gutsy one. It’s probably the right time to drop some of the small time terrorists, some of them we ourselves helped create, and go after the big fish. Because, as Kerry put it, continued destruction of our environment is simply not sustainable anymore. I mean, do we really think that removing hundreds of millions of tons of minerals and oil from the earth every year and burning them into the atmosphere, burying their waste in landfills and continually destroying our water resources and our forests, is going to have no effect on our ecosystem? We know it does, and Kerry has identified the right culprits, big corporations which are part of what is known as dominant capital, the heart and soul of the capitalist system. Kerry is also right in stating that pollution knows no borders. The global explosion of corporations since the 1970s and the constant threat of picking up operations and moving to more favourable countries under which they hold governments is part of that trend known to us as globalization.

But Kerry isn’t telling the whole truth. In his speech he only blamed some unidentified “loud interest groups” and “shoddy scientists” which, according to him, are hijacking the “climate conversation.” Similar to speeches declaring the pursuance of WMDs and the fight against terrorism, the language used is very vague. However, the same way it turned out most of these terrorists and locations (or the absence of them) weren’t quite unknown, we also know very well which industries and corporations are responsible for polluting. They come from such areas of business and industry as clothing, machinery production, electronics, mining, paper, oil production and the chemical industry, to mention only a few. Dominant corporations within these industries are caught inside the capitalist framework of continuous differential accumulation like mice inside a wheel cage. They can’t but keep running. As these corporations try to outdo each-other, not in an attempt to maximize, a concept as vague as Kerry’s words, but by measuring up against their competitors as they strive to stay ahead of the pack, the whole world is slowly turning into a mouse cage. And Kerry’s government as well as others which lend a hand to these dominant capital corporations to expand their tentacles around the globe continue to play a major role in helping and protecting them. Hence, it is not some shoddy scientists and some unidentified, loud interests groups that are the problem, but the system itself.

Thus, the change Kerry is talking about, like Obama’s, is not change you can really believe in. Of course Kerry is not seriously thinking about slowing down the capitalist process in the US. He is probably taking a swipe at China, Russia, Brazil and Iran, the main new contenders in the game, and maybe other developing countries. We should agree, however, that it is a bit of a hard pill to swallow after four hundred years of listening to lecturing European economists, philosophers and politicians about how reason, free markets and technology brought the West to the forefront of humanity and about how unreasonable and despotic the rest of the world is for not being able to follow suit. To put it mildly, for these countries it is not a suitable moment to stop what they’re doing right now. Kerry is probably also taking a swipe at the fanaticism that exists in some parts of the Republican party back home by identifying their ideology and their supporters (probably thinking of the coal business of the Koch brothers). And, related to this, we can also attempt to give an answer to the question why is he making the speech in Indonesia? Why not make that declaration of war in Beijing or Washington? Well, what place can be better suited to send out a message about terrorism than speaking about it in a Muslim country which also ranks higher up in the pollution offenders list?

What Kerry is really aiming at is only those interest groups and corporations which “sound loud” to him because he doesn’t want to lend them an ear anymore. This is not a whim of his, but a strategy which depends on the needs of a dynamic, continuously changing dominant capital. Therefore it’s not a few bad apples, a few corporations holding us back. Again, it is the system. And if we don’t aim properly, we might end up doing what the US did in Iraq and what it continues to do all over the world by using the “war on terror” and the finding of WMDs to bring more people, institutions and countries under that power system called “the free market” led, of course, by the West. If Kerry were serious about change, he could talk about the need to transform the system. He would probably talk about stymieing neoliberalism and the attendant environmental destruction. And finally, he would talk about refraining from giving weapons of mass destruction to countries that don’t have them yet.

Of course, none of this is in Kerry’s plans. In his defence, however, he did take a selfie with some of the young people in attendance who, like him, were all smiles. And that gives you all the assurances you need.