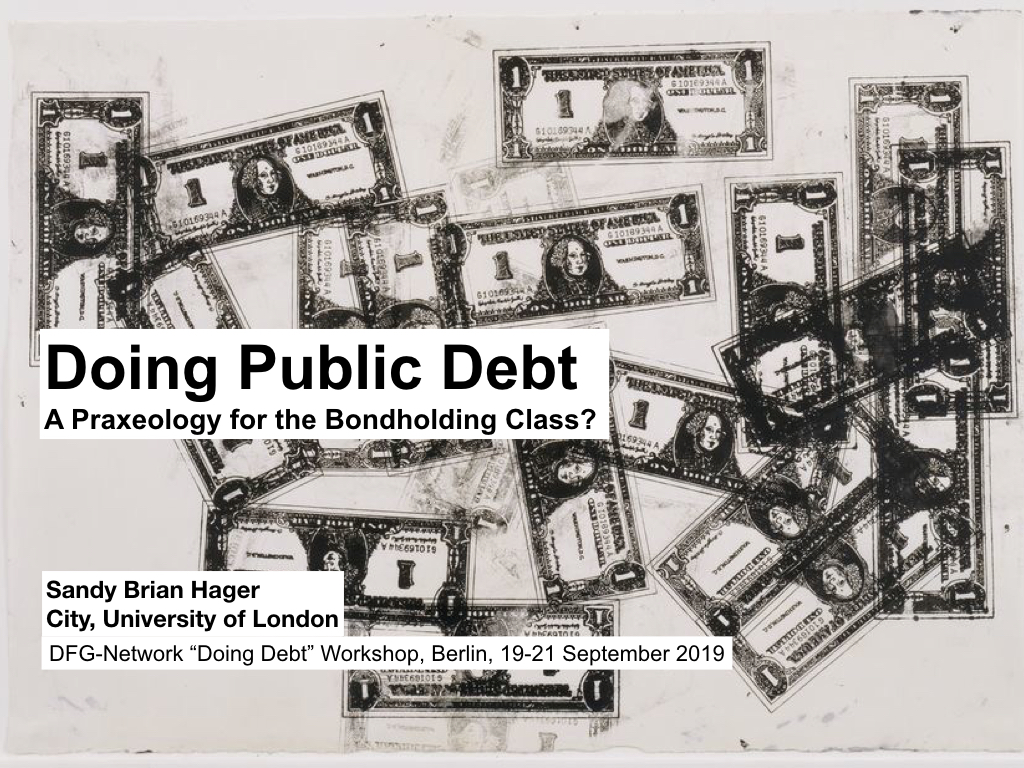 Doing Public Debt: A Praxeology for the Bondholding Class?

Earlier this month in Berlin I participated in the third workshop of the “Doing Debt” research network. I received the invitation back in May and was asked by the organizers to present my research on ownership of the public debt and to think about how this research might relate to praxeology and the theory of practice. As embarrassing as it sounds, I have to admit that I was unfamiliar with these concepts. Praxeology is something that I’d only heard in the context of the Austrian School of Economics. And at first I was dumbfounded as to why a group of Austrian School economists would want to hear what I have to say about the public debt. But as I soon found out that what this particular research network means by praxeology is totally different from the Austrian School usage of the term. I found the discussions at this workshop useful and in what follows I offer an abridged version of my own presentation.

After presenting some of the main findings from my book Public Debt, Inequality, and Power, a summary of which can be found here, I then shifted to offer some schematic thoughts on how my research might bear on questions of praxeology and practice theory. In particular, I discussed practice theory with reference to one of the questions that came out of the discussion from the research network’s previous workshop: “Can we define a ‘cast of characters’ that represents practices within the realm of public debt?”

My argument was that we can indeed define a cast of characters. The main character, at least from the top-down perspective of my research, is the “bondholding class,” which is comprised of the wealthy individuals and the large corporations that dominate ownership of the public debt. The challenging question is what makes the bondholding class a class? Class is a term that comes with a lot of conceptual baggage, especially when trying to adapt a nineteenth century class framework to contemporary capitalism. Taking cues from the theory of capital as power, I argued that it is ownership that unites the bondholding class into a class, as ownership, anchored in private property, is a foundational element of capitalist society.

So, what is it specifically about ownership that unites the bondholding class together? Here’s where I think practice theory might be relevant. We can follow Reckwitz and define practice as “a routine type of behavior.” Or we can follow Schatzki and define practice as “a temporally and spatially dispersed nexus of doing and saying things.” Either way, I claimed that there is a very distinct form of practice that emerges from the ownership of the public debt (and ownership all other assets). And that practice, again taking cues from capital as power, is capitalization, or the discounting of risk-adjusted future earnings into present value. As a practice, capitalization is both differential (or relative) and forward-looking. The goal of bondholders, like all other capitalist owners, is to augment the market value of their ownership claims relative to some average benchmark. And as a practice of valuation, capitalization is based on forward-looking expectations about future earnings.

There’s just one more thing to mention regarding this schema. Capitalization might, as I suggested, be the practice of power. But power is always dynamic, and so I’m interested in mapping how capitalization as a practice of power unfolds over time. If power is dynamic, then we need to treat it as a variable and not a constant. And I contended that the power of the bondholding class depends on two factors. The first factor is the degree of ownership concentration in the public debt. The more concentrated the debt is the easier it is for bondholders to overcome collective action problems and discipline governments into prioritizing imperatives of creditworthiness. The second factor is the degree of indebtedness. Wealthy households and large corporations might own a highly concentrated share of the public debt, but if public debt is only five percent of GDP then the power of bondholders will be limited compared to a situation where public debt is 95 percent of GDP.

That was my naïve attempt to think through the question of how my research might relate to practice theory. Perhaps I was trying to fit a square peg into a round hole. I might have tried too hard to force my research into the themes of workshop. But I think there might be a latent theory of practice in my research to be fleshed out, and in any case, it was helpful for me to think about my research in new ways, from a very different theoretical vantage point. To conclude the talk, I raised several issues that emerged from my engagement with practice theory. First, beyond providing a new and more sophisticated conceptual language, I was still left wondering what more practice theory could add to research on ownership of the public debt. Specifically, what methodological insights could practice theory contribute to the empirical investigation of the bondholding class? In simple terms, how would we study what bondholders do and say and why would it matter? Finally, I still have trouble understanding where power fits in practice theory. After reading a few key texts in preparation for the workshop, I heard surprisingly little in those texts about the concept of power.