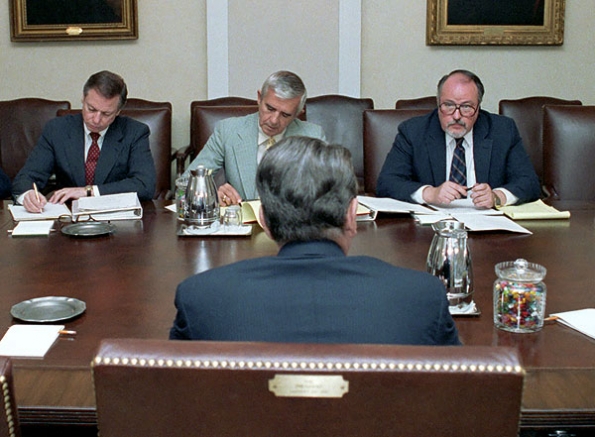 End of the line for Reaganomics

Reagan turned the country upside-down, in a very bad way. The “Reagan revolution” was indeed revolutionary (or, rather, counter-revolutionary), reversing a half-century of progress on social safety nets, workers’ rights, and environmental protections.

When we take stock of the Reagan years, we tend to focus on the actions that had immediate effect, like dismantling labor protections or the racist, homophobic refusal to confront the AIDS pandemic.

But for my money, the most profound act of the Reagan revolution was a slow-burner that has quietly chugged along for four decades, profoundly reshaping American society and the world. It’s a wonky, technical change, largely overlooked in our political discourse.

That change? The “consumer welfare” theory of antitrust enforcement.

Prior to Reagan, US antitrust enforcers relied upon a theory of “harmful dominance,” cracking down on monopolies when their scale allowed them to hurt workers, or the environment, or suppliers.

Harmful dominance is the theory that unaccountable power is dangerous – that giving corporate leaders control over the market lets them pervert the political process and inflict harms on the rest of us in ways that are hard to detect and even harder to prevent.

That principle created a policy that was designed to keep companies weaker than the democratically accountable state, rather than allowing them to grow so large that the could capture their regulators and start to write their own regulations.

Reagan nuked “harmful dominance,” replacing it with radical theories from one of Nixon’s top crooks, Robert Bork, whose book THE ANTITRUST PARADOX advances a conspiracy theory about US antitrust – that the framers of these laws never meant to protect us from monopoly at all.

Bork said that a the true purpose of antitrust law was – and always had been – “consumer welfare.” He said that so long as a monopoly didn’t use its market power to raise prices, that was fine -even if its scale let it screw workers, or suppliers, or whole communities.

This was a profound shift, because under “consumer welfare,” companies were allowed to grow big through sleazy, previously prohibited maneuvers like buying up or merging with all the competition, or creating vertical systems that boxed in their customers from all sides.

“Consumer welfare” had deep-pocketed corporate backers, who spread Bork’s conspiracy theory far and wide. For example, the Manne Seminars – summer “continuing education” junkets in Florida for judges – re-reeducated 40% of the US federal bench on Bork’s theories.

These seminars, along with decades of dark-money endowed economics chairs and think-tank activism changed the theory of competition regulation around the world – even in the EU, where the law explicitly rejects consumer welfareism, but lawmakers behave as if it embraced it.

Consumer welfare was bipartisan, embraced by every administration, R or D, since Reagan (in general Dems became more Reaganite over this period, culminating at the 2016 DNC where candidates vied to declare themselves Reagan’s true heir).

The result: a world where between 1-5 companies dominate nearly every industry, from pharma to eyeglasses, finance to accounting, shipping to hotels, health to mobile OSes – movies, music, books, telecoms, hospitals, pro wrestling, and on and on.

These companies don’t need to compete for workers or customers, and therefore extract vast sums for their shareholders. Some of that money is retained to buy off their regulators, allowing them to grow more powerful still.

Not only that, but these concentrated companies are able to arrive at a common bargaining position and wield it against the world’s democratic legislatures – when everyone who runs an industry can fit around a single table and hammer out an agreement, they often do.

Most of this happened so slowly that we didn’t realize it was happening at all, but not with tech. Tech is an industry that grew up with Reagan (literally, the Apple ][+ was born the same year as the Reagan presidential bid), and it was monopoly’s coalmine canary.

In a single generation, tech’s exuberant dynamism – where yesterday’s giants could be toppled by today’s spunky garage startups – turned into a calcified monoculture, “five giant websites filled with screenshots of text from the other four.”

After 40 years of dominance, consumer welfare is dying. Biden’s July 9 “Executive Order on Promoting Competition in the American Economy” is a terrifyingly technical, 72-point program for dismantling consumer welfare and reviving harmful dominance.

The Biden admin clearly consulted with public interest groups for these technical directives, people who are right at the coalface of the way that monopolies are destroying lives, who know exactly which levers to pull to shut it down.

This is especially true in tech, as I write in my latest piece for EFF’s Deeplinks blog: “Party Like It’s 1979: The OG Antitrust Is Back, Baby!”

And because personnel are policy, I also discuss the revolution in anttitrust leadship that accompanied the executive order: Lina Khan running the FTC, Tim Wu in charge of White House tech competition, and Jonathan Kanter running antitrust for the DoJ.

“We are living through a profound shift in what kinds of companies are allowed to exist and what they’re allowed to do. It’s a shift for the better. We know nothing is assured. The future won’t fix itself. But this is an opportunity, and we’re delighted to seize it.”