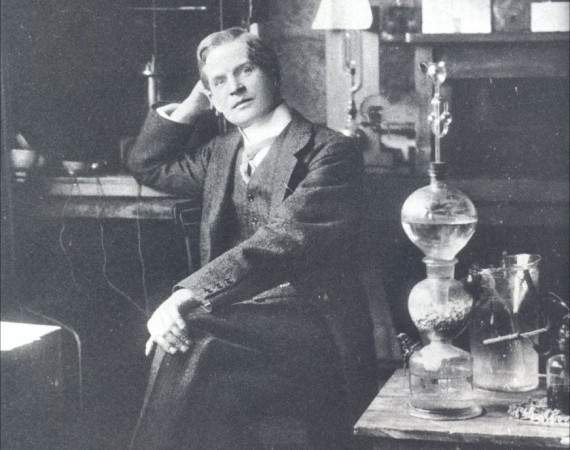 In the field of ecological economics, Frederick Soddy looms large. Born in 1877, Soddy became a chemist and eventually won a Nobel prize for work on radioactive decay. Then he turned his attention to economics.

Between 1921 and 1934, Soddy wrote four books that looked at how money relates to the physical economy. For his ground-breaking work, Soddy was rewarded with deafening silence. Here’s how ecological economist Eric Zencey puts it:

… Soddy carried on a quixotic campaign for a radical restructuring of global monetary relationships. He was roundly dismissed as a crank.

Although ignored during his life, Soddy’s work would become a central part of ecological economics. Let’s have a look at Soddy’s thinking.

Like a good natural scientist, Soddy insisted that human society is constrained by the laws of physics. Humans survive, he noted, by consuming natural resources. Exhaust these resources and we’re done for.

Think of humans (and our economy), says Soddy, like a machine. We transform energy into physical work. Like all machines, we’re bound by the laws of thermodynamics, which say that you can’t get something for nothing. Energy output requires energy input. That means humans are forever dependent on natural resources.

Now comes the problem. Our biophysical stock of resources — what Soddy called ‘wealth’ — is bound by the laws of thermodynamics. But money — which Soddy called ‘virtual wealth’ — is bound only by the laws of mathematics. Money can grow forever. Natural resource extraction cannot. This mismatch, Soddy claimed, is the root of most economic problems.

Here’s an example of Soddy’s thinking. Suppose that Alice is a would-be cattle farmer. She inherited some land and wants to use it to farm cattle. The problem is she has no money.

Banks usually require that you make regular payments on your debt. But to simplify the math, let’s assume Alice’s bank operates differently. It requires no regular payments. Instead, after t years, the bank demands full repayment (with interest). The amount Alice owes depends on three things:

Assuming interest accrues annually, here’s the formula for the amount (A) that Alice owes:

Suppose the bank charges 5% interest (r = 0.05). Here’s how much Alice will owe for various call-in times:

What’s important are the dynamics of Alice’s loan. As the call-in time increases, the amount she owes grows exponentially. This exponential dynamic, says Soddy, is a problem. Here’s why.

So here is the problem with interest-bearing debt. It comes with a baked-in need for economic growth. Or so it seems …

To see how, let’s return to farmer Alice. With her $100,000 loan, Alice bought 100 cows. After 10 years, the bank calls in her loan at $163,000. If cow prices don’t change, Alice needs to sell 163 cows to pay her debt. At first glance, it seems like her only option is to breed more cows. But there is an alternative. She could raise the price of cows.

Alice bought her cows at $1,000 per head. If she sells them for $1,630 per head, she can repay her loan without breeding more cows. So repaying interest-bearing debt doesn’t necessarily require economic growth. It can also be financed with inflation.

Our toy model of debt (based on Soddy’s reasoning) leads to a simple conclusion. If interest-bearing debt is to be repaid (en masse), there are only two options:

Jonathan Nitzan and Shimshon Bichler call these two scenarios breadth (economic growth) and depth (inflation). Although it’s theoretically possible to pursue both strategies at once, Nitzan and Bichler find that real-world societies tend to be single minded. They cycle between rapid growth with slow inflation (breadth), and slow growth with rapid inflation (depth). (For details, see Chapters 15 and 16 of Capital as Power.)

Both scenarios allow societies to pay off debt en masse. Yet both have problems. Let’s start with breadth. It’s simply suicidal (and impossible) to pursue economic growth forever. At some point we’ll either exhaust our resources and/or pollute the environment so badly that growth will cease. So paying off debt with perpetual growth is not an option.

What about depth? At first glance, it seems like inflating prices is a sustainable way to deal with debt. After all, the environment doesn’t care if prices grow exponentially. But humans do seem to care. Few people want inflation. Why?

The answer can’t be found on paper. That’s because in theory, inflation is a uniform increase in prices. But in practice, it never works this way. Real-world inflation is always differential. Some people are able to raise prices faster than others. This means that inflation always redistributes income. Unfortunately, the winners tend to be the powerful. (For details, see Jonathan Nitzan’s thesis Inflation As Restructuring.)

So based on Soddy’s reasoning, we find that interest-bearing debt comes with a fundamental problem. There is no fool-proof way to pay it back. Perpetually economic growth isn’t an option. And if we try to inflate away debt, the accompanying income redistribution creates instability. It seems there’s no way out of debt.

Actually, there is a way out of debt, and it’s surprisingly simple. We wipe the slate clean. We debt default.

In his book Debt: The First 5,000 Years, David Graeber argues that throughout history, default was the most common way of dealing with debt. Often this happened on a large scale in something called a ‘debt jubilee’. Unpayable debts were wiped off the books, allowing debtors to start fresh. Of course, this wasn’t a long-term solution. Eventually debts would accrue again, requiring another jubilee. But as long as debt loads remained reasonably small, the cycle could repeat without too much trauma.

This debt cycle is a good example of a wider phenomenon found everywhere in nature — stability through fluctuation. Natural systems are stable not through stasis, but through small-scale fluctuations. These fluctuations are a way of mitigating the exponential dynamics that would otherwise be catastrophic.

Of course, if the fluctuations are huge, we can hardly call this ‘stability’. But in most healthy ecosystems, population fluctuations are small. The key to dampening boom-bust cycles appears to be diversity. When there are many species in an ecosystem, each keeps the population of others in check. Prolonged exponential growth never gets a foothold.

In nature, the surest way to provoke exponential growth is to destroy diversity. This is something that industrial farmers know well. Here’s their recipe. Cut down a forest, plant a single crop, and wait … for the exponential growth of pests. In nature, monoculture is the enemy of stability. The same is probably true among humans.

The term ‘monoculture’ is especially apt, because debt is literally a culture. Debt is an idea — a convention of quantifying property rights, and then applying exponential dynamics to these rights. The dynamics themselves are not the problem. The trouble starts when the idea of interest-bearing debt becomes a monoculture.

Interestingly, throughout most of human history the use of debt was limited. And when it was used, many people were skeptical that debt should accrue interest. Hence the ban, in many medieval societies, on interest-bearing debt (dubbed usury). Think of this skepticism of debt as a sign of cultural diversity.

Debt, anthropologist David Graeber argues, is just one particular way of solving a fundamental social problem. All societies function by keeping track of a web of social obligations. Throughout most of human history, these obligations were tracked loosely and qualitatively. Alice helps Bob catch a fish. Bob returns the favor by helping Alice cook. Different cultures (and even different sub-cultures) had different ways of conceiving and tracking these obligations. Cultural diversity.

There are many ways that capitalism is different from other forms of culture. But perhaps the most important is the use of quantification. In capitalism, the web of social obligations (that have always existed) suddenly became quantitative. Bob doesn’t owe Alice a favor. He owes Alice $10. And if he doesn’t pay, that amount grows exponentially with time.

As with any monoculture, we expect boom-bust dynamics to be amplified. And so they have been. But here’s the terrifying truth. For the last 200 years we’ve been riding one long boom. For two centuries, debt has grown continuously. We’ve achieved this by perpetually consuming more resources and by perpetually raising prices.

Eventually there will be a reckoning. Societies like the United States are now plumbing the depths of income inequality (i.e. income redistribution). And humans are pushing the limits of the Earth’s carrying capacity. So what’s worked for the past 200 years won’t work for the next 200.

It seems clear that debt monoculture is doomed to fail. So in a way, Frederick Soddy was right. The dynamics of interest-bearing debt are a problem. But only because we’ve allowed them to become the dominant human culture.

Nitzan, J. (1992). Inflation as restructuring. A theoretical and empirical account of the US experience (PhD thesis). McGill University.

Soddy, F. (1934). The role of money: What it should be, contrasted with what it has become. London: George Routledge & Sons.