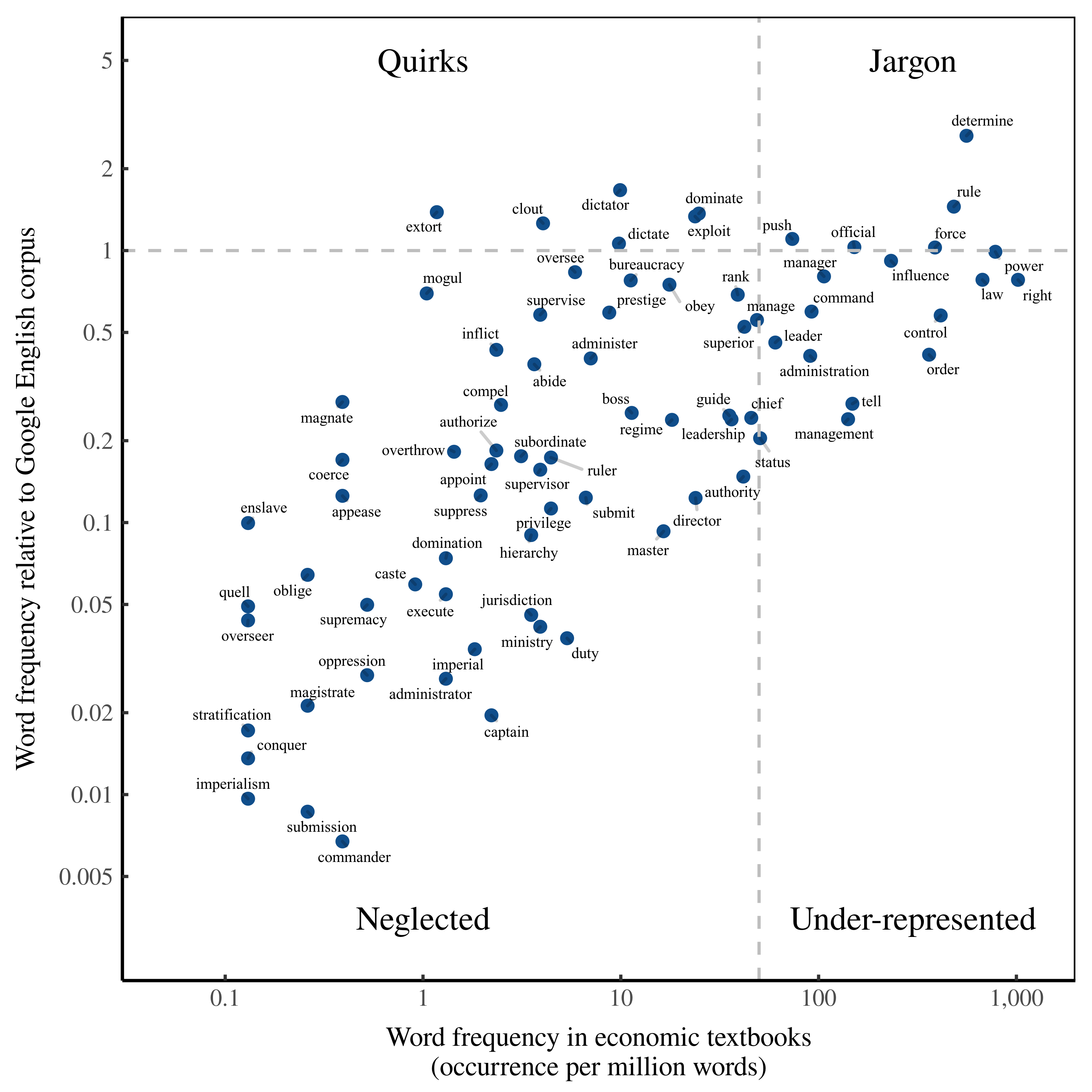 Power … and the Dialect of Economics

A few months ago, I went down a rabbit hole analyzing word frequency in economics textbooks. Henry Leveson-Gower, editor of The Mint Magazine, thought the results were interesting and asked me to write up a short piece. The Mint article is now up, and is called ‘Power: don’t mention it’. What follows is my original manuscript.

If you’ve ever taken Economics 101, then you’re familiar with its jargon. In the course, you probably heard the words ‘supply and demand’ and ‘marginal utility’ uttered hundreds of times. As you figured out what these words meant, you gradually learned to speak a dialect that I call econospeak.

Like all dialects, econospeak affects how you express ideas. The vocabulary of econospeak makes it easier to express certain ideas (such as ‘market equilibrium’), but harder to express others (like ‘imperialism’, as we will see). This trade-off is a feature of all specialized dialects. Physics-speak, for instance, makes it easy to talk about the dynamics of motion, but difficult to talk about emotion.

While all scientific languages share this kind of trade-off, econospeak is different from natural-science dialects in one key way. The natural sciences have a solid empirical footing. Mainstream economics does not. As Steve Keen showed in his book Debunking Economics, when the ideas in Econ 101 are subjected to scientific scrutiny, they manifestly fail.

Despite this scientific failure, Econ 101 charges on like a juggernaut, largely unchanged for a half century. Why? The simplest (and most incendiary) explanation is that the course is not teaching you science. Rather, it is indoctrinating you in an ideology.

In his introductory textbook Principles of Economics, former Fed Chair Ben Bernanke admits as much. He writes: “economics is not a set of durable facts … it is a way of thinking about the world.” I agree. Economics 101 teaches you a fact-free way of thinking — the very definition of an ideology.

In their book Capital as Power, political economists Jonathan Nitzan and Shimshon Bichler go further. They argue that mainstream (neoclassical) economics is “ideology in the service of the powerful”. If this is true, the trade-offs in econospeak take on new meaning. In particular, the words that are absent from the economics dialect indicate ideas that the powerful wish to suppress. As we will see, what econospeak seems to suppress is the idea of power itself.

To better understand the economics dialect, I recently assembled a large sample of economics textbooks. I measured the frequency of words in these books, and then compared this frequency to what is found in mainstream English (as measured by the Google English corpus). Here is what I found.

We can find similar differences across the whole economics dialect. Because there are about 35,000 unique words in my textbook sample, I cannot discuss the results for every word. But I can show you the ‘structure’ of econospeak. To do so, I’ll break the economics dialect into four quadrants, as shown in Figure 1. (If you want to explore this data in more detail, I have built an interactive app available here.)

In Figure 1, each point represents a word. The horizontal axis shows the word’s frequency in economics textbooks. The vertical axis shows this word frequency relative to mainstream English. I have divided the economics dialect into four quadrants that I call ‘jargon’, ‘quirks’, ‘under-represented’ and ‘neglected’.

The ‘jargon’ quadrant contains words that economists use frequently, and far more than in mainstream English. Here you will find the jargon of economics — words like ‘supply’, ‘demand’, ‘marginal’, and ‘utility’.

The ‘quirks’ quadrant contains words that economists use infrequently in absolute terms. But these words are so rare in mainstream English that economists actually overuse them in relative terms. In the ‘quirks’ quadrant you will find the language of economic parables. ‘Superathletes’, for instance, are a parable for extremely productive people. And to be ‘grasshopperish’ is to be lazy.

When you learn economics, you focus on the jargon and the quirks. What you do not focus on are the words in the lower two quadrants of Figure 1. These are words that economists underused relative to mainstream English. You tend not to notice these underused words because absence is difficult to spot. But when we crunch the numbers, it becomes obvious which words economists choose not to say.

Let’s look at the ‘under-represented’ quadrant. Here you will find words that economists use frequently — almost as frequently as economics jargon. But outside of economics, these words are so common that economists actually underuse them. In the ‘under-represented’ quadrant you will find (among other things) the language used to describe the bureaucratic structure of groups — words like ‘organizations’, ‘administration’, ‘management’, and ‘committee’. Economists, it seems, prefer not to think about bureaucracy.

And now to the ‘neglected’ quadrant. Here live words that are common in mainstream English, yet which economists utter rarely. It is here that we find the language of power.

Not speaking about power

Economists, it seems, do not like to speak about power. We can see this fact in Figure 2. Here I show words that relate to wielding and submitting to power. I’ve plotted their frequency using the same coordinates as in Figure 1 — the ‘quadrants of econospeak’. I find that the vast majority of these power-speak words live in the ‘neglected’ quadrant. Economists rarely utter them. And relative to mainstream English, this constitutes massive underuse.

What should we make of the relative absence of power-speak in economics? One possibility is that economists are simply unaware of the power dynamics of modern capitalism. This is a popular argument made by in-house critics like Wassily Leontief — the former President of the American Economic Association (AEA). In his 1970 presidential address to the AEA, Leontief scolded his colleagues for building models that had little to do with reality. Economists, he claimed, made theoretical assumptions based on ‘nonobserved facts’.

In this telling, it is ‘naive assumptions’ that cause economists to neglect the language of power. Leontief’s criticism certainly has an element of truth. The assumptions baked into mainstream economics models are extremely naive — at odds with an ever-growing array of evidence. But what Leontief’s critique does not explain is economists’ intransigence. It has been fifty years since Leontief scolded his fellow economists for ignoring the real world. And yet in the time since, Econ 101 has remained virtually unchanged. Why?

The intransigence of Econ 101 points to a darker side of economics — namely that the absence of power-speak is by design. Could it be that economics describes the world in a way that purposely keeps the workings of power opaque? History suggests that this idea is not so far-fetched.

An investment in hiding power

In building his industrial empire, Rockefeller was ruthless in wielding power. Here is how Jonathan Nitzan and Shimshon Bichler describe it:

This ruthless use of power, you can imagine, gave Rockefeller a bad image. Enter Rockefeller’s ‘investment’. In founding the University of Chicago, Rockefeller created the first bastion of neoclassical economics. It was at the University of Chicago that Milton Friedman penned his ode to free markets, Capitalism and Freedom. It was there that Theodore Schultz and Gary Becker proclaimed that income stemmed from productive ‘human capital’. And it was there that the ‘Chicago boys’ were trained — a group of Chilean economists who helped Augusto Pinochet institute a brutal military coup in the name of the ‘free market’.

In the writings that came out of the Chicago school, ruthless acts of power were not discussed. Instead, the focus was on a fantasy world governed by ‘perfectly competitive free markets’. This fantasy, argue Nitzan and Bichler, “helped make Rockefeller and his like invisible”. It allowed capitalists to cloak their power in euphemistic language. Capitalists did not wield ‘power’ … they wielded ‘freedom’.

A century later, Rockefeller’s investment appears to still be paying dividends. As Figure 2 shows, the language of power remains conspicuously absent from economics textbooks. This absence, I believe, is by design.

The key to successfully wielding power is to make control appear legitimate. That requires ideology. Before capitalism, rulers legitimized their power by tying it to divine right. In modern secular societies, however, that’s no longer an option. So rather than brag of their God-like power, modern corporate rulers use a different tactic. They turn to economics — an ideology that simply ignores the realities of power. Safe in this ideological obscurity, corporate rulers wield power that rivals (or even surpasses) the kings of old.

Are economists cognizant of this game? Some may be. Most economists, however, are likely just ‘useful intellectuals’ — clever people who are willing to delve into the intricacies of neoclassical theory without ever questioning its core tenets. Meanwhile, with every student who gets hoodwinked by Econ 101, the Rockefellers of the world happily reap the benefits.

For more details about my analysis of econospeak, see my blog post Deconstructing Econospeak.