Is Hollywood running out of risk?

If we are to believe the conventional creed, Hollywood films are highly risky investments. According to De Vany,

revenue forecasts have zero precision, which is just a way of saying that ‘anything can happen’. . . . The ‘nobody knows’ principle . . . is revealed in the infinite variance and scale-free form of the probability distribution. When the probability distribution is scale free it has no characteristic size and there is no typical movie. If variance is infinite, the prediction is impossible; one can only say that the expected revenue of a movie is X plus or minus infinity (De Vany, A. S., 2004. Hollywood Economics: How Extreme Uncertainty Shapes the Film Industry, New York: Routledge, p. 260; quoted in McMahon’s 2015 PhD dissertation, http://bnarchives.yorku.ca/463/)

Movies, in other words, are like a box of chocolates. Their producers and distributors never know what they’re going to get when the movies open to the viewing public. They can be loved or hated. They can succeed or bomb. They can gross hundreds of millions or generate huge losses. In short, their ex-post performance is ex-ante unpredictable.

According to James McMahon’s 2015 PhD thesis, this conventional view is seriously out of tune with the rapidly changing reality. In his dissertation, titled What Makes Hollywood Run? Capitalist Power, Risk and the Control of Social Creativity, McMahon shows that, over the past three decades, the large Hollywood firms have managed to reduce their big investment risk to practically nil. 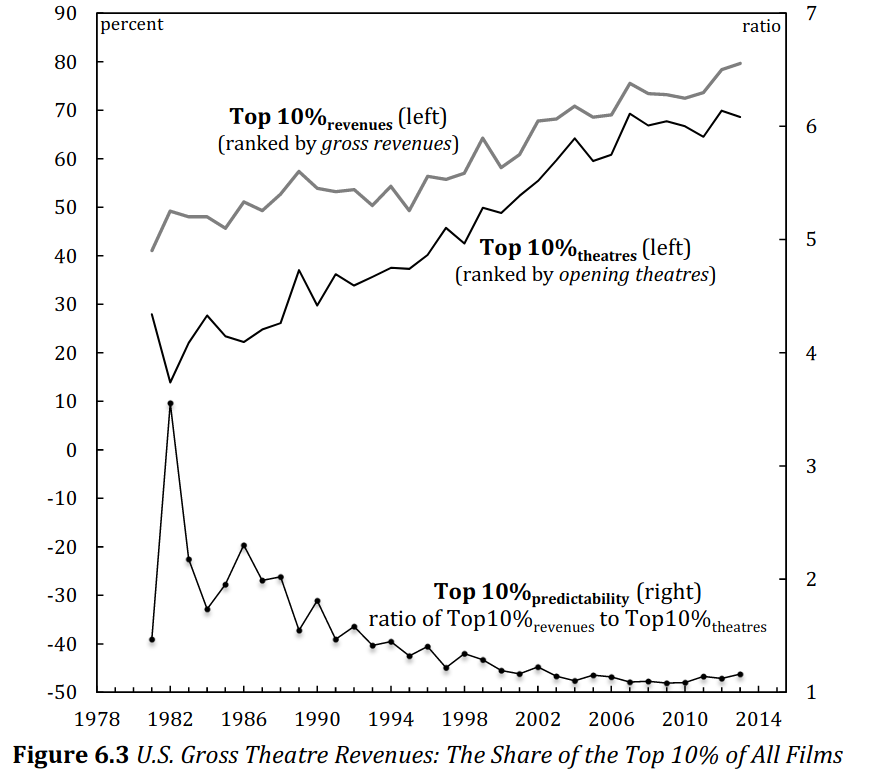 Now, if Hollywood’s ex-ante expectations were always correct – i.e. if the movies that open up in the greatest number of theatres always grossed the most ex-post revenues – the two series would be the same. This happy outcome would be akin to running a nearly risk-free business – and, surprising as it may sound, Hollywood has almost achieved it!

The bottom series, plotted against the right scale, calculates the ratio of the ex-post to ex-ante series. It shows that, until the late 1980s, their ratio ranged between 2 and 3. At the time, then, Hollywood was indeed running a risky business. But ‘the times, they are a-changin’, and radically so. First, as the top series shows, the relative importance of the leading films has increased dramatically. Whereas in the early 1980s, the revenue share of top 10% of the films ranked by revenues accounted for slightly over 40 per cent, by the early 2010s this number doubled to 80 per cent. Second, and relatedly, Hollywood has greatly improved its ability to predict which films will do better than others. This increased ability to predict the future is evidenced by the continuous drop in the bottom series, which, since the early 2000s has approached its asymptote of 1. In other words, the big Hollywood firms have pretty much run out of risk.

Over the past several decades, we’ve been hearing endlessly about ‘hegemony’, ‘discourse’, ‘deconstruction’ and similar politically correct slogans, all aimed at trashing ‘modernity’ and condemning ‘commodification’, ‘objectification’ and ‘alienation’. But slogans don’t change the world. It takes real research like McMahon’s to demonstrate how capitalism actually creorders – or creates the order of – cinema, to show how exactly it undermines its creative autonomy, and to explain precisely how it turns it into a virtually risk-free business. It is only with this type of deep insight that we can hope to challenge the capitalist dominance of entertainment.

To learn more on how this business feat has been achieved and what it means for the art of filmmaking and popular culture more generally, read McMahon’s dissertation and watch his videotaped presentation ‘I’ve Seen this Movie a Thousand Times.’

One thought on “Is Hollywood running out of risk?”