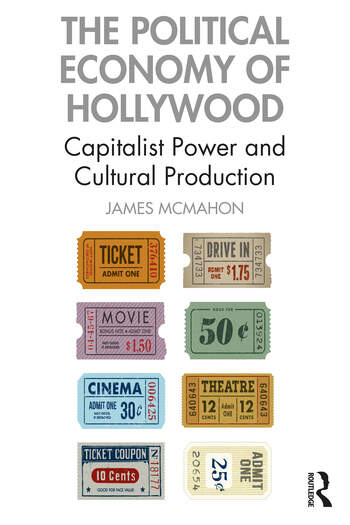 McMahon, ‘The Political Economy of Hollywood’

In Hollywood, the goals of art and business are entangled. Directors, writers, actors, and idealistic producers aspire to make the best films possible. These aspirations often interact with the dominant firms that control Hollywood film distribution. This control of distribution is crucial as it enables the firms and other large businesses involved, such as banks that offer financing, to effectively stand between film production and the market. This book analyses the power structure of the Hollywood film business and its general modes of behaviour. More specifically, the work analyses how the largest Hollywood firms attempt to control social creativity such that they can mitigate the financial risks inherent in the art of filmmaking.

Controlling the ways people make or watch films, the book argues, is a key element of Hollywood’s capitalist power. Capitalist power—the ability to control, modify, and, sometimes, limit social creation through the rights of ownership—is the foundation of capital accumulation. For the Hollywood film business, capitalist power is about the ability of business concerns to set the terms that will shape the future of cinema. For the major film distributors of Hollywood, these terms include the types of films that will be distributed, the number of films that will be distributed, and the cinematic alternatives that will be made available to the individual moviegoer. Combining theoretical analysis with detailed empirical research on the financial performance of the major Hollywood film companies, the book details how Hollywood’s capitalist goals have clashed with the aesthetic potentials of cinema and ultimately stymied creativity in the pursuit of limiting risk.

This sharp critique of the Hollywood machine provides vital reading for students and scholars of political economy, political theory, film studies, and cinema.

The Political Economy of Hollywood: Capitalist Power and Cultural Production